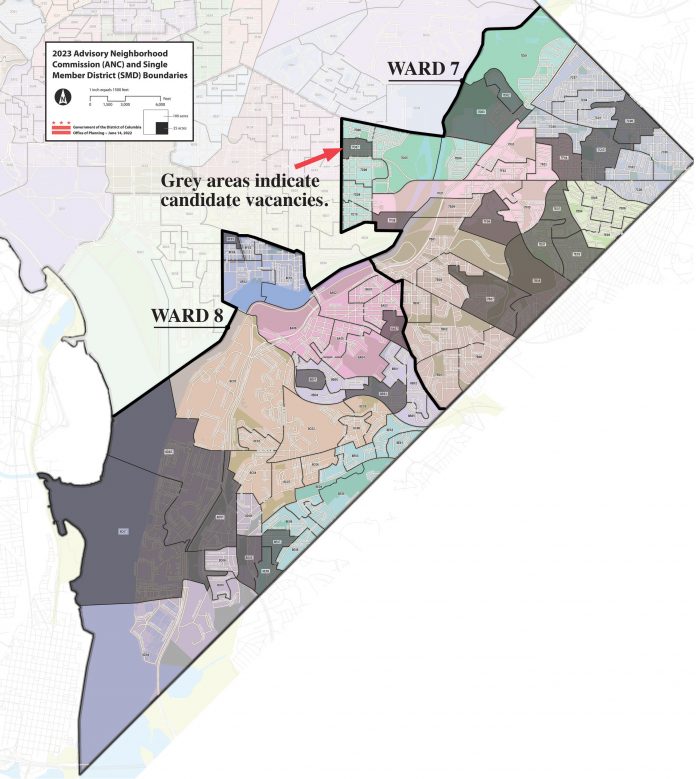 What if an election were held and there were no candidates on the ballot?

For the November 8th general election, thousands of DC voters will receive ballots that have no candidates for Advisory Neighborhood Commissioner.

Each of the 50 ANCs is divided into Single Member Districts (SMD) of approximately 2,000 residents.  There are 345 SMDs and 57 (16%) of them have no candidates on the November 8th ballot. For the full roster of ANC candidates, please visit dcboe.org, click on elections and scroll down to ANC candidates.

After the votes are tallied there will be few vacant SMDs because of write-ins. In the past some persons have been elected commissioners simply because they wrote in their own names. However, we should be concerned that currently 114,000 residents have no candidates running to represent them at the grassroots level. The commissioners are the governmental eyes and ears of and for the neighborhoods.  ANCs are where the rubber hits the road.

Why are there so many vacancies on the ballot? Well, obviously there are many neighborhoods in DC where no one is interested in running for ANC. All the wards have candidate vacancies. So, evidently not a single ward councilmember took the time or interest to make sure that there is at least one candidate for every SMD on the ballot.

Why weren’t the community activists and leaders on the case? Of the 57 SMD vacancies, 24 are east of the river. Once again another example of the political weakness of east of the river residents is in full display. Again another chapter is written about the disempowerment of predominately African American and economically challenged neighborhoods.

Let us be honest. With the new residents moving into DC and the inexorable gentrification we are experiencing, east of the Anacostia River might as well be called the ebony coast.  It is apt and symbolic that the nickname for Ward 8’s Congress Heights neighborhood is Soul of the City. We who live east of the river should be alarmed and shocked that there are SMDs with no candidates. In Ward 8, ANC 8D which encompasses the Bellevue and Washington Highlands neighborhoods has eight SMDs and five have no candidates.  That is disappointing at best and shameful at worst.

Hopefully by the time the first ballots reach the mailboxes of voters, our elected leaders and community activists will put out the call that our neighborhoods are looking for a few good candidates to wage write-in campaigns for ANCs.  We need some young people to work their social media magic and send out the messages that we are looking for a few good candidates. And I hope that the write-in candidates that come forth will take their volunteer service seriously after they are sworn into office.

There have been too many instances of ANC members being chronically absent resulting in some commissions at times being unable to achieve quorums to do official commission business. Successful ANC candidates, whether they were on the ballot or write-ins, should be as serious and committed to their voluntary, uncompensated duties and responsibilities as they would be about their paid employment. The community deserves that and hopefully their personal reputations would demand it.

Advisory Neighborhood Commissions are grassroots governmental bodies that do serious business for the people. Never again in DC where we are struggling to become a state should there be any position on any ballot that has no candidates.

How serious should we be about ANCs? Ask Mayor Muriel Bowser and Council Chairman Phil Mendelson who began their elected careers serving as Advisory Neighborhood Commissioners in Wards 4 and 3 respectively.