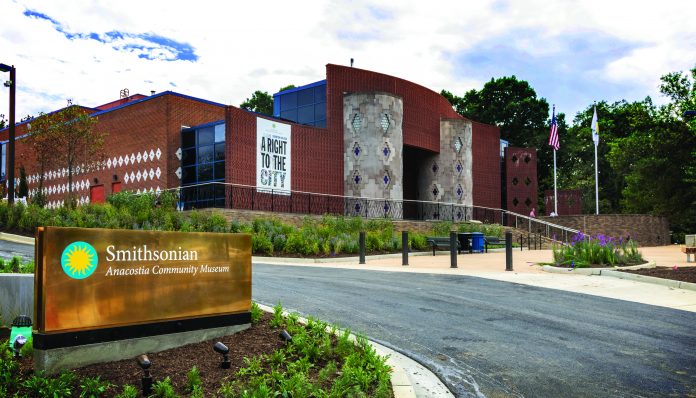 With over a half a century of community-based programming under its belt, Smithsonian’s Anacostia Community Museum (1901 Fort Place SE) continues to produce vanguard exhibitions that challenge the public to rethink norms and to take action.

ACM remained active during the pandemic through cutting-edge public programs like “31 Men of Change” and “Food for the People” which were exhibited outside.   ACM curators reimagined how exhibitions could be viewed while ensuring the public was kept safe from COVID.

At ACM’s helm since August 2019, Director Melanie A. Adams has spent over a quarter-century managing community-based programs.  Her arrival coincided with the museum’s new mission now aimed at preserving “communities’ memories, struggles, and successes, [offering] a platform where diverse voices and cultures can be heard.”

For the museum’s 55th anniversary, Adams encourages the public to participate in the “Portraits by the People” project by submitting a self-portrait and personal story. The entries will be unveiled in a public celebration marking the museum’s anniversary on the evening of Thursday, September 15.

While admittedly mostly operating in “pandemic mode” since taking over after the completion of the museum’s renovations in the summer of 2019, Director Adams brings an impressive 25 years of community-centered approaches to education and experiencing museums.  Her career also includes a working as a mayoral appointee in St. Louis, Missouri with a focus on improving racial disparities in that city’s educational system.  From 2005-2016, Adams led the Missouri Historical Society as Managing Director, overseeing 700 St. Louis community programs with over 100 community partners. More recently, in 2016, she served as Deputy Director for Learning Initiatives at the Minnesota Historical Society.

Adams’ experience in building community-based programming dovetails almost seamlessly with ACM’s ongoing mission as a neighborhood-centered learning institution.  It stives to reflect its surroundings by centering its programming on the communities which it served including unrepresented populations whose stories often go ignored. Adams says that ACM will continue to “talk about the stories of the people who are furthest from justice. Our emphasis is local; the Mall is national.  We are telling the local stories of the DMV.”

“Food for the People” not only challenges the public to rethink what they eat and how they obtain their food but who produces and distributes the food they consume.  A detailed discussion of food accessibility addresses the disparities seen in the DC region with regard to “food insecurity” which the exhibition defines as “limited or uncertain access to affordable, nutritionally adequate food.”

The exhibit puts a human face on food production by showcasing the work of reformers, honoring food workers, including farmworkers, meat processors, grocery store clerks and restaurant workers.  By way of sculptural tributes, the museum’s curators acknowledge and value food workers’ labor which made life possible for the rest of us during quarantine.

On September 15 from 6-8:30 p.m., ACM will host its first public event since in-person programming was suspended due to the pandemic.   Director Adams welcomes the entire region to “Come celebrate with us!”

Any anniversary is call for a celebration but as Adams’ explains, the main goal of the event is to “reconnect with and to celebrate the community.”   And what better way to connect with the museum then by also being part of an ACM exhibition!  Everyone is encouraged to go to ACM’s website at https://anacostia.si.edu/celebrate55 and to upload their portrait and to include a personal story which will be used for the “Portraits by the People” project, which will be projected on the wall of the museum at sunset during the celebration.

Not to be missed during the celebration, Soul and Ink, a locally-based mobile screen printing shop, will be onsite as part of the festivities.  Attendees can be able to print custom T-shirts and totes which they can take home.  Soul and Ink’s screen print designs will be custom made just for the evening.

The center will offer a series of public facing programs and exhibits designed to engage audiences and provide ways in ways in which we can individually make a difference through personal action.

An urban gardening series will be Included in the. Workshops for children 10 and over will provide instruction on how to grow fruits and vegetables.

Down the Road – Organizing and Cataloging the Museum’s Archives

ACM obtained a grant from a private foundation to catalog and organize its archives with the end-goal of making them accessible to the public.  Adams says that ACM “has a rich collection of African American art” in its archives.  Much of that art comes from a half century of visual arts programming and includes regional artists’ work. Ultimately, she hopes to “make the archives more usable.”

Visit the museum’s website at www.anacostia.si.edu. More information can be found at  ACM’s 55 year celebration and “Portraits by the People” project, https://anacostia.si.edu/celebrate55