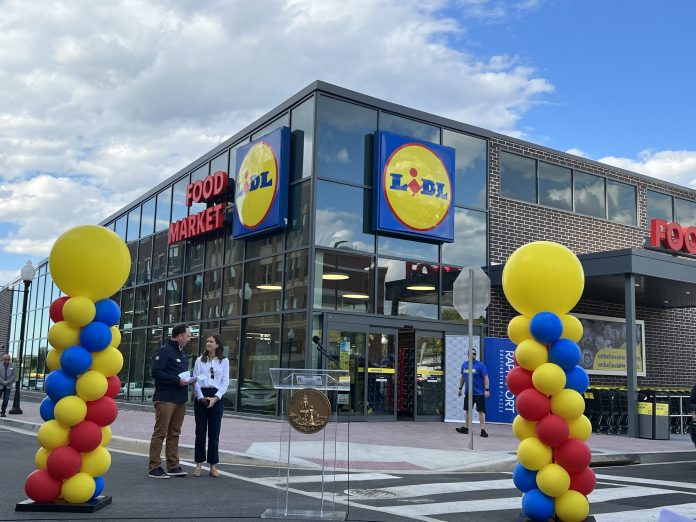 “I don’t know if we ever thought that this was going to happen,” said Ward 7 Councilmember Vincent Gray at the ribbon-cutting for the Lidl at Skyland Town Center (2224 Town Center Dr. SE) Sept. 27. “But it happened.”

It’s also a huge deal. Development has been a 30-year project, one spearheaded by community members such as the Washington East Foundation. Community members wanted to see the area developed, bringing economic stimulation, commercial amenities and fresh food to the area.

Washington East Foundation Board Chair Carrie Thornhill has been involved for all three decades. She said the opening of Lidl was a move to irrigate the food desert and pointed to the more than 60 new jobs created at the store, 90 percent of which are held by residents in wards 7 and 8.

As mayor in 2012, Gray negotiated a deal that would bring two Walmarts to Wards 7 and 8, including one at Skyland, at the same time as three others were opened in more affluent neighborhoods. After building the first three, Walmart pulled out of the deal.

At the event, Mayor Muriel Bowser (D) noted that five Mayors had worked on the Skyland project. “But I will be the last one,” she said, vowing that the District would continue to leverage purchasing power, eminent domain and the courts to achieve their goals.

Touting the store itself as a community benefit, Bowser said the grocery store was a result of demands by a community that approached then-Mayor Anthony Williams to ask for change.

“They weren’t satisfied with what was happening,” she said. “We have to have more amenities in our community,” she said as she recounted their concerns: “We’re tired of always having to cross the bridge and we’re tired of having to go to Maryland.”

At the ribbon-cutting, residents said they were excited to see the new Lidl. “I like to see a new store in the neighborhood,” April said. “We deserve it.” She said she wanted to see fresh produce and the kinds of offering they have at competitor Aldi.

Les Taylor has lived in the new development for nearly a year now and welcomed the convenience of the Lidl. But he said it was the economic opportunity and the jobs created that were the biggest plus for him. Two neighborhood friends joined him at the ribbon-cutting; both said they wanted to see a wider array of fresh foods and better customer service.

“It’s a fantastic idea,” said Yetter, who joined Taylor and his friend Kevin Jones at the opening. “I’m glad that it will give the community a plethora of choice in different foods and the pricing should be good for them.”

The Lidl was billed as proof positive that big name business can succeed in the District. It is only the latest opening at Skyland. The 263-unit Crest Apartments opened in spring 2021. Already open are CVS, Chase Bank, Like That Barber Shop, Skyland Nail Salon & Spa and restaurants including Roaming Rooster, & Pizza, Fuji Hibachi and Sushi as well as the first drive-through Starbucks in DC. Scheduled to open later this year are Mezeh, Maizal, Tropical Smoothie Café and Edenbridge PACE healthcare center.

“It’s been fifteen years since we opened a full service grocery store in Ward 7,” Mayor Muriel Bowser said. “It won’t be 15 years until we open the next one.”

In June, Bowser announced that the District would use eminent domain to acquire Capitol Gateway Marketplace for development, which is set to include a Giant Grocery Store.

The city is moving to spur grocery investment in communities east of the river. Councilmember Gray introduced three East End economic development bills focused on ending food deserts in Wards 7 and 8 by incentivizing infrastructure and economic development that would bring needed neighborhood amenities to the East End. The Lidl benefited from $43 million in tax increment financing funded capital infrastructure and utility improvements for Skyland.

DC also provides a Neighborhood Prosperity Fund grant for the commercial funding of development in targeted census tracts. $73 million has been allocated to the Food Access Funds which provides funding for grocers and restaurants in lower-served parts of the District. Several tenants at Skyland benefit from the fund, including Tropical Smoothies and Half Smoke.

Ebony moved to the Crest Apartments in June. She attended the event Sept. 27, ready to evaluate Lidl’s offerings. “They have a lot of nice stuff in there,” she said after the ribbon cutting, which featured a sneak peak of the store.

But after the speeches, Ebony said she was also intrigued by information shared about the Food Access Fund. “I already like to cook and I was already considering opening a restaurant,” she said. “Maybe this could be my opportunity.”