The Ward 7 Redistricting Task Force met for the eighth time Monday evening to discuss and amend a final map draft. The map, initially proposed by task force member and Chair of the Marshall Heights Civic Association and Fletcher-Johnson Taskforce Keith Hasan-Towery, has been discussed in the last two meetings.

11 commissioners voted to accept the map in its entirety, and 7 to accept it partially. Task force members reconvened Monday evening to propose and vote on amendments.

A Visit from Councilmember Silverman

At-large Council Member and Chair of the DC Council’s Subcommittee on Redistricting Elissa Silverman attended the meeting to speak about the redistricting process and guidelines.

Some task force members questioned her appearance. She said that she was appearing at other wards redistricting meetings throughout the process.

At the end of the meeting, Task Force Member Dr. Marla Dean expressed concern about the next steps of the redistricting process once the report is sent to the DC Council for further review.

“This process is ending for me on a very negative note,” Dean said. “I’m very disheartened. I feel like the Council Member’s comments were not neutral, and her preference here was not neutral so I’m concerned about what’s gonna happen at the next level.”

One of the major issues debated drink task force meetings was whether there should be an ANC located entirely west of the river or whether  it would be better to include the portions of Hill East now part of Ward 7 in a cross-river ANC.

Task force member Brian Alcorn, currently a 6A commissioner, voted to partially accept the ‘Ward 7 Stronger Together’ map, saying that “it didn’t take into account” his community’s equities.

“This map and the amendments continue to split Capitol Hill’s equities between two ANCs,” Alcorn said. “They do not meet the principles of redistricting, and while I’ve had a great opportunity to meet and discuss these matters repeatedly in the task force meeting, I feel that the community was not given deference to draw lines that were focusing on the priorities of redistricting.”

Task force member Francis Campbell expressed his opposition to the map as a whole in discussion.

“I’m opposed to this map in its entirety,” Campbell said. “It does not keep communities together. It separates communities on the side of the river that have been and have worked together over the years.” 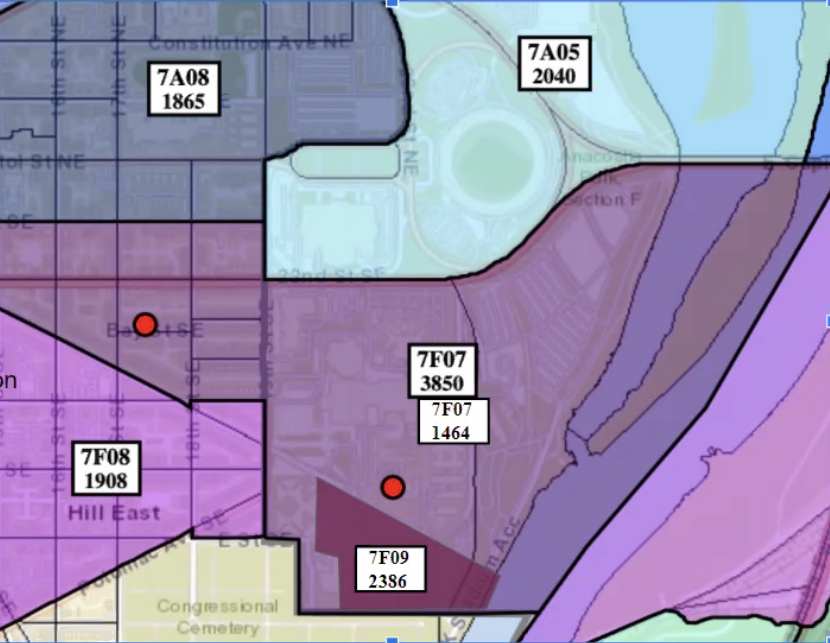 Amendments to the Final Map

Five amendments successfully were successfully proposed to the draft map. The first was put forth by task force Nisha Patruni on behalf of Max Richman to the SMDs in ANC 7F proposed discussed at the last meeting. The adjustments centered on SMDs around the DC Jail, 7F07 and 7F08. The adjustments would move nearly 300 residents from 7F08 to 7F07. However, these would still require a waiver as they fall outside of the 5 percent deviation threshold. The task force voted 15-3 to advance this amendment.

Task force member Travis Swanson presented two amendments in ANC 7B. The first pertained to the Fort Davis area, expanding the boundaries of SMD 7B08 to increase the population and ensuring that each of the SMDs in 7B reach the minimum threshold of 1,800 residents each. The task force voted unanimously to advance this amendment.

The second amendment presented by Swanson for 7B was to draw a line straight across the park, wooded area between Randall Highland and Hillcrest. This would cut the census tract manually just either straight across or trail through the wooded area to include that one house, currently separated from neighbors in the Hillcrest SMD. This amendment was also passed unanimously by the task force.

The fourth amendment was proposed by task force member Tomeika Bowden and focused on the east of the river 7F boundaries, specifically on adjusting SMDs 7F05 and the Fort DuPont neighborhood where SMDs were split in the final draft map. Bowden’s amendment was “specifically trying to address and take into consideration land and equity issues” and help maintain neighborhoods where they initially resided. This amendment passed the task force unanimously.

The fifth amendment, discussed by task force member Caprice Casson and Hasan-Towery, proposes the addition of an additional SMD to 7E, which would give 7E eight SMDs in total. This was passed unanimously by the task force.

The task force will now assemble a final map and report, which will be voted on at a final meeting. Once agreed to by the taskforce and approved by the councilmember, the Ward 7 ANC boundary maps will be put to a vote on by the entire DC Council twice this spring.

The full task force plans to meet again on Thursday March 31 at 4 p.m. to take a final vote on the report created by the selected members of the task force.

A recording of the March 28 meeting is available on YouTube. The task force’s final map and report must be submitted to the DC Council by April 1.

Sarah Payne is a general assignment reporter for the Hill Rag and East of the River Newspapers. She can be contacted at sarahp@hillrag.com.

This story has been updated to reflect Councilmember Elissa Silverman’s appearance at the Ward 7 Redistricting Task Force meeting.

Federal Tax Bill Will Increase Inequality in DC, But We Can...