The discussion at the third listening session held by the Ward 7 Redistricting Task Force was principally around unity, and ironically, it grew to be somewhat heated. The major discord at the meeting was over whether there should be a Ward 7 ANC located on only the west side of the river.

The meeting focused on the portions of Advisory Neighborhood Commissions (ANCs) 6A, 6B and 7D, portions of Hill East and Kingman Park now redistricted as part of Ward 7. The task force is charged with making recommendations for new ANC and Single Member District (SMD) boundaries.

Approximately 9,438 residents moved from Ward 6 to 7 in Hill East, joining Ward 7 ANC SMDs 7D01, which represents Kingman Park, and 7F07, which represents Reservation 13 and the residents of DC Jail for a total of about 13,681 residents in Ward 7 on the west side of the river.

A proposal for an ANC located solely on the west side came from current 6A08 Commissioner Brian Alcorn and former 6B10 Commissioner Francis Campbell, who jointly put forward a map that would create an 7-member ANC 7A west of the river.

Commissioner Alcorn was supported by Commissioners Denise Krepp (6B10), Alison Horn (6B09) as well as Sandra Philips-Gilbert (6A07). All said that they had been working together on issues particular to the area, notably traffic concerns on 17th and 19th Streets SE and concerns around the mobilization of the National Guard at Stadium Armory.

“I am very supportive of unity and want to make sure that myself and my residents have opportunities to be united,” said Horn. “But I think that needs to not happen at the expensive of having a real meaningful vote and say in what’s going on around us.”

However, other task force members called for a new ANC that includes parts of what was 6A and 6B but would also include parts of the other side of the river in the name of unity. Those task members say that a cross-river ANC would help ameliorate value-laden distinctions between communities west and east of the river.

Task force member Mandla Deskins said there are more issues that do and should unite communities than that divide them. “We should make sure that people who live across the river, our isolation is not continued as it has been in the past,” Deskins said, “just because we are black people and we live east of the river.”

Task force member Dr. Marla M. Dean agreed, saying her opinion is that West of the River should not have its own ANC. “I think that sends a terrible message,” she said. “I think we should be looking for ways to show we’re integrated and unified.”

Former 6B10 Commissioner Campbell responded to calls for cooperation and unity by pointing to the past. He said that after 2010 redistricting, when ward boundaries were redrawn to move Reservation 13 from Ward 6 to Ward 7, it was difficult for the neighbors across the street who now lived in a different ward to give their views. “I find it very difficult, listening to what you’re saying,” he told commissioners arguing for unity. ““We were told continuously, ‘stay out of it. It’s not your concern,’ despite the number of years that I invested into it.”

Task Force Co-Chair Tamara Blair has served as the Commissioner for 7D01 since 2018. She said she has had trouble bringing motions to a vote before the wider ANC. Blair said the residents of Kingman Park, where she has been active for decades, have concerns that she said “don’t impact and probably won’t interest anyone other than the communities in this contact area.”

“For the last 20 years we’ve been the only section [of Ward 7] with the exception of 7F07,” Blair said, referencing the SMD representing DC Jail now filled by Commissioner Caston for the first time. “It’s been a challenge that I can’t even describe. So, anyone who has a differing opinion: you’re entitled to your opinion, but you haven’t walked the walk.”

Former ANC 7D07 Commissioner Artile Wright acknowledged Blair’s concerns with 7D01 being what she called “the stepsister” of the commission, saying she understood that there are unique concerns to that SMD. But she pointed to the connections, including the Anacostia River, Pepco Station clean up, Kingman Island, and the extension of the streetcar.

“I think losing 7D01 I think would be hurtful to 7D as a whole, although I recognize there are unique circumstances that don’t necessarily fit the composition and design of the rest of 7D,” Wright said. 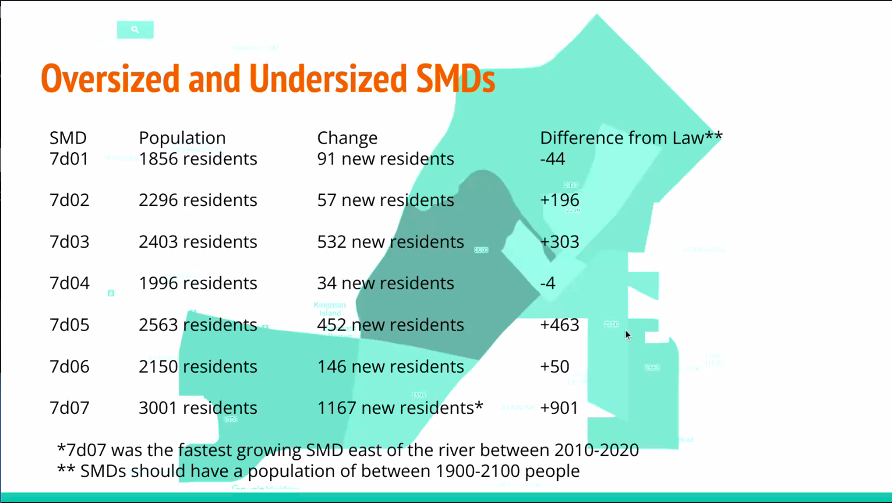 Former ANC 7D Commissioner Justin Lini pointed to numbers that show that it is possible to create a new SMD for ANC 7D, which now represents 1,865 people over the limit in legislation. Lini said ANC 7D07 was the fastest growing SMD east of the river gaining 1167 residents in the past decade.

A second SMD Could include the Metro Townhomes as well as Paradise at Parkside and Mayfair Mansions, and 25 newer town homes with roof decks on Parkside Place, extending over Minnesota ave to include Hayes and Grant between Minnesota Avenue and 42nd Street NE. Paradise, Mayfair and Metrotown should be in one SMD, she said, because all contain units owned or under direction of the District of Columbia Housing Authority (DCHA) and so have unique issues; it’s easier to engage with DCHA as a single SMD as opposed to multiple individuals tackling one issue, she said.

An SMD for DC Jail

The Alcorn-Campbell map also subdivides the census block around Reservation 13 to include an SMD specifically representing neighbors inside the DC Jail, made difficult to convey via District mapping software by the inability to subdivide the map. A representative from community organization Neighbors for Justice appeared to endorse such a move.

7F07 Commissioner Joel Caston, elected when he was still a resident of the jail, also gave his support. He pointed to the number of residents, pointing to his own personal history to argue that such representation can spur civic engagement for a group of residents that are often disengaged. “I think it is advantageous for our city as a whole,” Caston said. “If they have a seat at the table when they’re on the inside, when they transition to back home, we can at least think that hopefully these individuals, once on the wrong side of the tracks, will be on the right side.”

This was the third meeting during which the Task Force focused on listening to members of the public. Co-Chair Blair said the Task Force will announce their two remaining sessions after polling the availability of members. Those sessions will largely focus on task force discussion of maps and proposed boundaries but are also open to the public.

Contrasting the robust discussion with a lack of submitted ANC and SMD maps, Blair has asked members who have received training on the District’s mapping tool to schedule an information session for residents the week of Mar. 7 to 11. Dates and information are forthcoming.

Learn more about the redistricting process and timeline by visiting www.elissasilverman.com/redistricting