Regardless of whether a neighborhood is built quickly by a single developer or over decades with numerous landowners, the development of a neighborhood from vacant or underutilized lands usually involves vision, good planning, public investment —typically in infrastructure—and private investment. Such is the case with the nearly 500-acre Capitol Riverfront neighborhood which has been evolving for over two decades now.

An Industrial Backyard
Visitors to the Capitol Riverfront neighborhood of 2021 would not remember its previous incarnation as an industrial and manufacturing backyard for the District of Columbia that contained metal scrapyards, concrete manufacturing plants, asphalt batch plants, large oil storage tanks, an incinerator and trash transfer facility, car repair shops. That landscape also included the Arthur Capper Carrollsburg public housing complex, the Washington Navy Yard, and dance clubs. After WWII the neighborhood was largely forgotten and overlooked by the city and the real estate development community. But with almost two miles of riverfront frontage, and a 15-minute walk to the US Capitol complex, the neighborhood was well positioned for discovery and an intensification of uses. 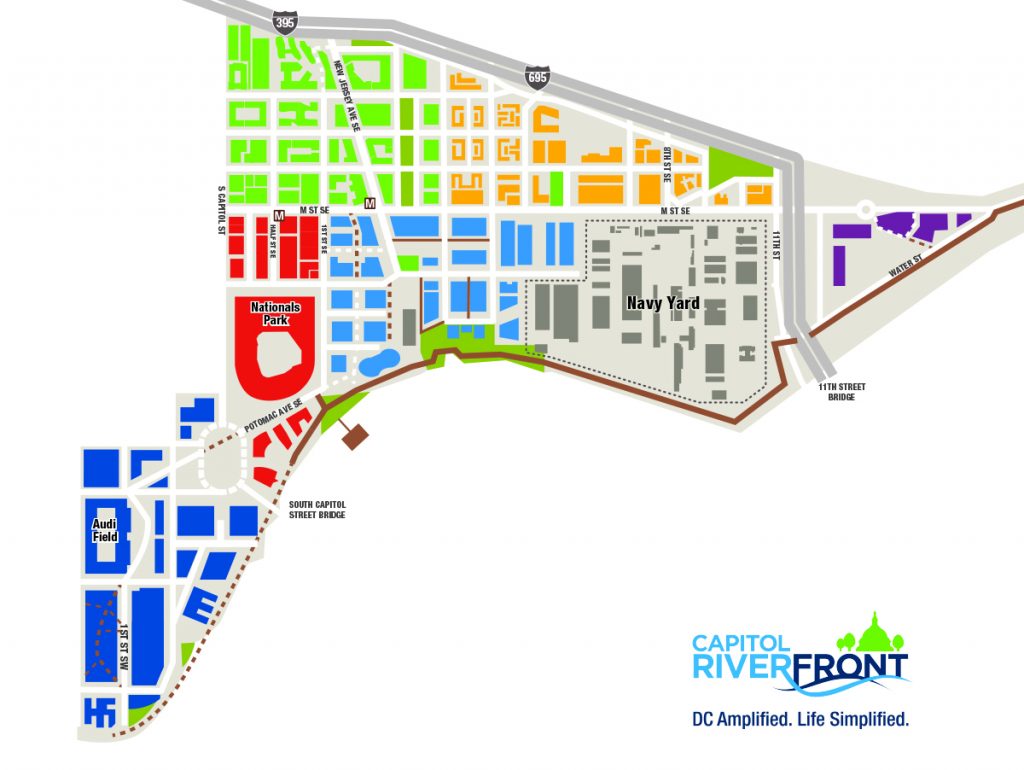 Change Agents
The neighborhood’s trajectory was changed by a series of large economic development moves and public investment based on a new vision for the Anacostia River – that the river could be cleaned up and become a centerpiece for the east side of the city and neighborhoods in Wards 7, 8 and 6. The adoption of the Anacostia Waterfront Initiative (AWI) Plan in 2003 as public policy began changing the public’s perception regarding the value of the river and the importance of waterfront neighborhoods. The 1995 move of the Naval Sea Operations (NAVSEA) from offices in Crystal City to the Washington Navy Yard brought over 8,000 employees to the neighborhood. Private contractors followed as well resulting in the construction of five new office buildings. Several other key economic development moves followed that plan and laid the groundwork for today’s Capitol Riverfront neighborhood:

These large economic development moves led to the construction of thousands of units of new housing, approximately six million square feet of new public and private office space, new restaurants, and hotels. Unfortunately, in late 2008 the national recession impacted the nation for approximately three years and most development projects came to a standstill. During that time Capitol Riverfront saw the construction of Yards Park and its opening to the public in September 2010. Yards Park has become a regional waterfront destination as well as one to the neighborhood’s greatest communal gathering spaces.

Following the recession, the neighborhood began to once again see development projects underway with residential becoming the dominant land use.

A Look Forward
Capitol Riverfront is a “new growth” neighborhood comprised of seven subareas that offer different architecture, mixes of uses, and open spaces. Each subarea is evolving at its own pace, but each will contribute to the neighborhood’s ultimate buildout of 37.5 million square feet of mixed-use development. Let’s jump ahead to the year 2030 to see how the neighborhood looks at full buildout:

The Yards – Phase I of The Yards has achieved full buildout with the construction of a new office building on the parking lot immediately east of District Winery. Yards Phase II has been realized as an office/commercial district north of N Street, SE with Chemonics being the first office building completed. The blocks south of N Street, SE are home to 4-5 new residential buildings with ground floor retail. New local roads have been constructed east/west and north/south to provide circulation and ground floor retail opportunities. A new park space has been constructed north of Diamond Teague and to create additional open space overlooking the Anacostia River. The Yards in its entirety has become a new downtown on the Anacostia River with a vibrant restaurant and retail scene.

The Heights – this subarea north of M Street, SE and west of 2nd Street, SE has become the highest density subarea in Capitol Riverfront. Greystar’s mixed-use project just south of the freeway and west of New Jersey has added another hotel (AC Marriott) and two new residential towers. The frontage on South Capitol Street has been built out with three additional apartment buildings and one office building, and a new office building occupies the southwest corner of Half and L Street, SE. The areas beneath the freeway have been transformed into a network of arts, recreation, and open space. The three DCHA sites that front on Canal Park have been constructed as residential building with affordable housing components, as well as ground floor restaurants or retail services. One of these sites contains a new condominium building and an affordable apartment building.

Ballpark District – the Ballpark District has become not just the entertainment gateway to Nationals Park but a year-round celebratory space for residents and visitors to the neighborhood. The southwest corner of Half and M Streets SE has been completed as a new class A office building, and the Half Street streetscape improvements have been extended to M Street. All retail storefronts are active and lively, and the street is closed on Nat’s game days and on Saturdays for a year-round farmers market and street fair. Half and N Streets, SE now serve as pedestrian-only celebration spaces for the holidays and other special event days such as St. Paddy’s Day, Halloween, July 4th, etc. The area south of National’s Park has been completed with an office building and a new destination hotel on the river.

Buzzard Point – this subarea has developed as a high density, mixed-use neighborhood with over 5,000 units of housing, two (2) hotels, new office space, seniors housing, a grocery store, new restaurants, and a new public park on the tip of Buzzard Point. It connects to both the Wharf and Capitol Riverfront east by way of the Riverwalk trail. S Street, SW serves as a pedestrian gateway to major new development on the former concrete manufacturing site, and new piers and docks provide river access for boaters. The Memorial oval that was constructed with the new Frederick Douglas bridge provides additional open space relief and the opportunity for food and music festivals.

Canal Park /Capper/Lower 8th – Van Ness Elementary School and the Capper community center have become anchors of the neighborhood’s “civic” infrastructure providing a range of community serving activities. The old car barn at M and 8th Street, SE (now known as the Capital Turnaround) has been completely renovated and includes Phase Family Learning Daycare Center, a 982-seat auditorium (open), an Ebenezer’s Coffee house, a co-working facility, and an urban marketplace with restaurants and retail shops. The Humane Rescue Alliance has opened their new headquarters building at 11th and M Streets, SE overlooking Virginia Avenue Park. Virginia Avenue Park has been enhanced with additional landscaping, trees, and public art and serves a neighborhood park for this area of Capitol Riverfront. Development sites along Virginia Avenue, SE between 7th and 8th Streets, SE have been redeveloped as a hotel with a restaurant and celebration venue on the top floor.

Washington Navy Yard – a new Navy Museum has opened at the Washington Navy Yard, and it occupies Building 74 and Building 202 – two historic structures from its earlier days as a munitions manufacturing center. A new exhibit space building and an entry plaza with ship artifacts and a water feature open on to M Street, SE and welcome over 1 million visitors a year to the museum’s interactive displays and installed memorabilia from the U.S. Navy’s rich history on the seas and in the air. A restaurant, museum shop, and conference facilities further activate this museum campus and make it a showpiece for the neighborhood and a tourist destination.

Maritime Plaza/Boathouse Row – the Maritime Plaza site has been fully realized with the construction of a new office building, hotel, and residential building overlooking the river. Felice Development’s mixed-use project at 1333 M Street, SE has delivered and contains an apartment building, condominium building and hotel, along with ground floor retail that overlooks and takes advantage of the Virginia Avenue ROW. A new park has been created by DOEE on the former Washington Gas gasification site and it is a passive meadow style park that provides access to the river along the trail. The historic shed structure on site has been renovated to serve as a canoe/kayak/bicycle rental space and refreshment center. Boathouse Row has been renovated and a new community structure built to serve all of the historic clubs. The river channel has been dredged here and new docks for the boathouse clubs as well as the public have been built.

A River Defines Us
Part of this transition to a waterfront neighborhood was predicated on the belief that the Anacostia could be cleaned up for human interaction – boating, swimming, and fishing. Numerous nonprofit groups have been advocating for the river’s clean-up and leading efforts to do so. The catalytic change truly began with the implementation of DC’s Clean River Project – a series of deep tunnels that serve as storage cisterns for the combined sanitary and storm water effluents that had polluted the river for so long. The Clean Rivers project has eliminated over 95% of this effluent from being discharged into the Anacostia and changed the perceptions of the river at the same time. The Anacostia River is a point of differentiation for our Capitol Riverfront neighborhood and defines our “outdoor ethos” while connecting us to over 1,600 acres of public parks and open spaces along the river.

Two new bridge systems connect us to neighborhoods in Wards 7 and 8, while creating a “bridge loop’ trail system of 3.3 miles for running, walking, and cycling. The new 11th Street Bridge Park when open will only reinforce this connectivity and destination appeal of the Anacostia and its parks.

At buildout, Capitol Riverfront will include approximately 37.5 million square feet of new development on formerly underutilized or vacant industrial lands. For a point of comparison, the Phase I and II of the Wharf project in SW Waterfront contain approximately 4.2 million square feet of development and is a great urban interface with the Washington Channel and an example of one developer/owner implementing a neighborhood vision. Capitol Riverfront at build-out will be the equivalent of 9 Wharfs in size and will be developed by multiple ownership entities in partnership with the Federal Government and the government of the District of Columbia.

As of the end of December 2021 Capitol Riverfront will be approximately 70% built out, and it is hoped that the remaining 30% can be achieved over the next decade. To most observers it may seem like a long time to achieve buildout. But these three decades (2000 – 2030) of development are chapters in the 231 years that Washington, DC has been evolving as a city. Neighborhood development is a complicated process involving multiple players and highly dependent on market economics. Capitol Riverfront is a vibrant example of a new growth neighborhood with a waterfront geography that has benefited from a definitive vision, good planning, public investment, and private response. 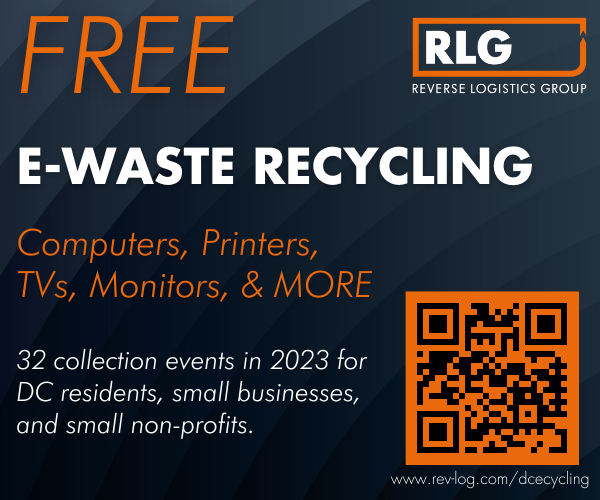 A Proven Success in Affordable Housing