In March, developers Rappaport and WC Smith announced the signing of leases for five new restaurants at Skyland Town Center (2219 Town Center Dr.). The establishments, most of them locally based, will bring new and diverse dining options ranging from Mediterranean and South American flavors to standbys like pizza and chicken sandwiches to the neighborhoods surrounding the 18.5-acre, mixed-use development in the city’s Ward 7.

Skyland Town Center is located at the intersection of Alabama Avenue, Naylor Road and Good Hope Road SE. The project has persevered through many challenges. Legal entanglements over property acquisitions, as well as a sudden decision from Walmart in 2016 to back out of opening a Skyland store, set construction years behind schedule.

But once completed, Skyland will be the site of more than 450 homes, a grocery store, a medical office building and up to 156,000 square feet of retail, including the five new restaurants.

“I know it’s taking time, but what we’re seeing at Skyland is a development that matches the vision of the Ward 7 community —a site with new housing, a grocery store, good amenities, and jobs and opportunity for DC residents,” said Mayor Muriel Bowser. “I look forward to the continued groundbreakings, and I look forward to all the ribbon cuttings even more.”

District officials, including Ward 7 Councilmember Vincent C. Gray (D) have been working for years to get more retailers to open on the east side of the Anacostia River. Skyland is seen by many as a crucial piece of those efforts.

Mix of Retail, Residences
In addition to the five new eatery openings, the Crest at Skyland Town Center, a 290,000 square foot residential property, will begin leasing and welcoming residents this spring. The building will include 263 homes and amenities such as a fitness center, courtyard pool and grills.

The units are a mix of studio, one- and two-bedroom apartments. Of the 263 units, 53 are set-aside for those earning up to 80 percent of Median Family Income (MFI) and 26 are designated as workforce units (80 to 120 percent MFI).

“Today’s announcement of the additional amenities coming to the Skyland Town Center is the result of decades of hard labor,” said Councilmember Vincent Gray in a March 24 release. “I am pleased to have relentlessly worked during my time as mayor and with the current administration to bring a solid anchor to Skyland after Walmart reneged and withdrew its commitment.”

Gray has introduced legislation to subsidize new grocery stores in Wards 7 and 8, targeting  nine development sites, including Skyland, for retail and full-service grocery stores. “As such, what could have stayed a dream deferred is now not just a beacon of hope, but valuable proof of real progress through collective effort,” Gray said. “Now, the grocery stores, sit-down restaurants and amenities needs of deserving Ward 7 families and neighbors are starting to be met.”

WC Smith Chairman and CEO Chris Smith said that the signing of the restaurants at Skyland is a harbinger of change for the area.

“For too long, Wards 7 and 8 were overlooked when restauranteurs looked to open new locations,” he said. “With the signing of these new businesses at Skyland Town Center, these neighborhoods are beginning to move from food deserts to food destinations.”

Nearby residents said they were cautiously optimistic. “I think it will change the neighborhood to where there won’t be too much crime up here; the po[lice] will stay up here,” said Tony, 52,  who said he has “been around” the neighborhood for 15 years. “It’s uplifting to the neighborhood, but it’s also: ‘can the people in the neighborhood afford the city? —because housing is high in the city right now,’” he said.

Tony said that the businesses and nearby residents would have to work hand-in-hand to keep the community strong.

Tenant List Grows
The new restaurants join CVS, Skyland Nails and Spa, and Like That Barber, a neighborhood institution that has been serving families in Wards 7 and 8 for 30 years. Also opening later this year at Skyland is Chase Bank. Lidl Grocery and Starbucks will open in 2022.

Coming to Skyland Town Center are:

Roamin’ Rooster is expected to open in fall 2021. The other restaurants are slated to open in late spring and early summer 2022. WC Smith said that additional retailers and restaurants will be named in the coming months. 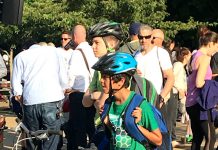