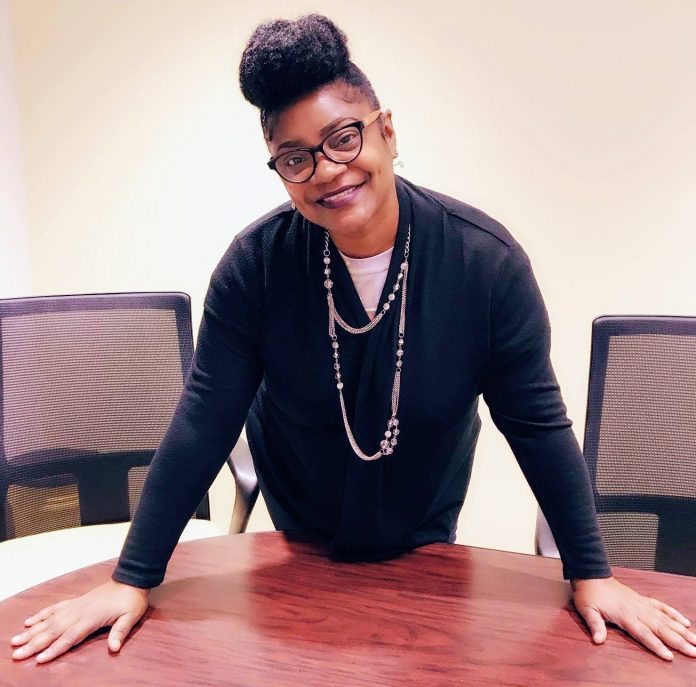 Robbie Woodland is a product of her environment and her family’s upbringing. The Ward 8 resident and one-time scrappy street hustler is now a devoted mother and dedicated community activist.

Woodland, like many living in Ward 8 and Southeast, came from the most humble and modest beginnings. In fact, Woodland’s family had a decidedly negative reputation on their block and community for being undesirables.

Early Family Life
“I grew up in a family of criminals. My family was not your average family in any way. They did not do the right thing! They did not keep up with their credit score or do anything middle-class like that,” Woodland said matter of factly. “I spent a lot of time with my grandmother who helped raise me. She was one of the very few in my family who wasn’t about that life!”

The family was involved in the narcotics trade and many other nefarious things. Woodland learned the family business at a young age and started peddling cocaine and drugs in her teens.

She spent time at a receiving home on Mount Olivet Road and was a resident at the Sasha Bruce Youth Services on Maryland Avenue. By the age of 17 Woodland had been moved to a transitional living program and then later, between the ages of 19 and 21, to an independent living program for young, troubled adults.

“Later as a young adult I began to go back and forth in and out of DC Jail. I probably spent a total of two years of stay through all of my stints.”

Woodland, now 47, completely changed her life after coming to the aid of her younger brother, June, and his stalking paramour. In a jealous rage, the brother’s lover stabbed him for a perceived slight in Woodland’s presence. She then wrestled the knife out of her hand and stabbed the woman.

Luckily for her the deadly but non-fatal conflict resulted in Woodland only receiving probation for four years, scores of community service hours and paying $250 of restitution. It was a wake-up call and a pivotal time in Woodland’s life since she was initially facing a 10-year prison sentence for the violent altercation.

The resilient woman is also a sexual abuse survivor. She describes herself as lucky because she was able to break away from the family’s legacy by changing her lifestyle and making sure that her two daughters, ages 16 and 5, were not around criminals.

“One of my earliest childhood memories I remember was being locked inside my mother’s car. I can remember it being hot and sitting on the right side of the car and my mother coming by the window and saying, ‘Baby we’re going to get you out.’ That happened with me being locked inside the car more than once,” Woodland said.

Turnaround
Woodland went from “negative to positive,” as the hip-hop icon Notorious B.I.G. once rapped, after she completed her metamorphosis from petty thug to viable activist. She invested in herself by earning credits at Kaplan University and taking a satellite course from Cornell University.

The attractive woman with the gregarious smile started working in the field of social work and outreach for the Families United of the Metropolitan Area in Temple Hills before starting her current position with the District of Columbia Government’s Office of Unified Communications as a Non-Emergency Operations Division (311) Customer Service Representative.

Her primary duty is to receive and evaluate calls from internal and external customers requesting information from city agencies like the Department of Motor Vehicles, Department of Public Works, Department of Energy and Environment, Department of Consumer and Regulatory Affairs and the Department of Transportation. She gets daily calls regarding parking tickets, trash collection, requests for lead and asbestos inspections, illegal construction and parking enforcement.

Advisory Neighborhood Commissioner
Maybe it was her job or simply “because I was once a participant in the dysfunction and wanted to help solve it at the other end” that motivated Woodland to seek and become an advisory neighborhood commissioner.

An Advisory Neighborhood Commission (ANC) is a non-partisan, neighborhood body made up of locally elected representatives called commissioners. The ANC was created in 1974 through a District referendum in the District of Columbia Home Rule Act. The commissioners, who serve two-year terms without pay, are elected at DC Elections in November in even-numbered years.

“She was my ANC commissioner and I miss her,” said Pamela Brown a District of Columbia Government employee who lives in Ward 8 in Congress Heights. “Commissioner Woodland went beyond the call of duty. She did more than she had to. She really cared. She did many good things like (arrange to) give senior citizens breakfast and lunch on a regular basis.”

Health Issues & Plans
Woodland decided not to seek reelection as an ANC due largely because of her health crises. Two days after her last birthday in September, she had a mini stroke. In addition, Woodland learnt that she had scoliosis in her back and high blood pressure.

“The majority of people in Ward 8 do report crimes but nothing seems to get done about it. It is like good versus evil. You have people who want to live their best life and want to do the right thing, but then you have people who are absolutely hopeless and comfortable in their circumstances. Sometimes it makes you feel that the criminals are protected. I am being led by God. I am focusing on rebuilding the community one action at a time.”