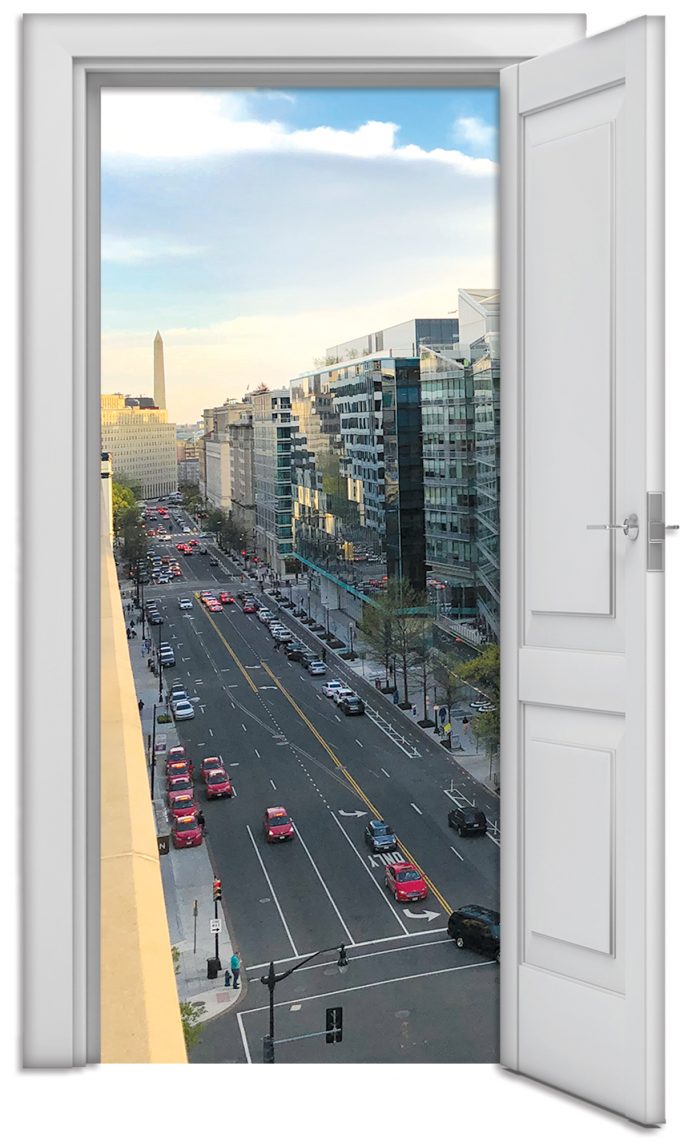 We’ve all heard the stories, and some of us are living them. People have lost their jobs, local businesses are worried about paying staff and staying solvent. Restaurants are closing, some temporarily and some for good. People are sick, and people have died. As the COVID-19 crisis continues in the District, the question everyone is asking is: when do we turn a corner? And, who will be at the rudder?

Scientists are already trying to map a pathway out of the pandemic. On April 17, experts at Johns Hopkins University released guidance for governors on a phased reopening, which Mayor Muriel Bowser said would guide decisions on the reopening of the District. Most experts agree that the return to something approaching what was once called ‘normal’ will be a slow, phased process.

Slow Phases to Reopening
Right now, the District and most of the nation are in the first phase described in the John Hopkins report, where we try to slow the spread of the disease by staying away from one another, shutting down non-essential businesses and limiting gatherings. District officials say that while there were fewer confirmed cases than expected in late April, with hospitals running at about 75 percent capacity as of April 20, they are still planning for cases to peak in late June.

Most experts agree that the District cannot reach the third phase, when restrictions are completely lifted, until there is a coronavirus vaccine.  In early March, National Institute of Allergy and Infectious Diseases (NIAID) Director Anthony Fauci said even under these urgent conditions a vaccine could take 12 to 18 months to develop.

In between, there is the second and most uncertain phase, a gradual reopening on the local level. It is an uncertain phase because it is not clear what metrics or data will be used to determine when each jurisdiction is ready to reopen. It is also uncertain because even a gradual lifting of protective measures is likely to eventually trigger a new rise in cases, forcing leaders to reimpose strict measures. Finally, there is question of what will be allowed to reopen and who will be permitted –or compelled—to step outside the restrictions first.

If COVID-19 was taking place outside of social and economic concerns, it may be desirable for social restrictions to remain in place until a vaccine was approved. However, even the Director-General of the World Health Organization (WHO) acknowledges the real-life conditions that make this impossible. During an April 13th press conference, Dr. Tedros Adhanom Ghebreyesus discussed the huge number of people who have lost their jobs and the closure of schools disrupting education for years to come. “This has halted their education, opened some to increased risk of abuse and deprived many children of their primary source of food,” he said.

On April 24, Mayor Bowser announced that she had formed a ‘Reopen DC Advisory Group’ to guide the process and monitor progress. But both Bowser and DC Health Director Laquandra Nesbitt say that before District restrictions can be loosened, they need to see a consistent downward trend in new cases over a 14-day period. They also want to be sure the medical system can provide appropriate care for everyone who needs it, and that there is sufficient [ersonal protective equipment (PPE) for those providing care. Following the John Hopkins report, Nesbitt also emphasized a need to test all those with COVID-19 symptoms, close contacts and those in essential roles, and the ability to do contact tracing for all new cases.

Bowser has announced that the District is now in the process of hiring contract tracers, building the team from 65 to 200 tracers now, with a goal of around 900 by the time restrictions are loosened in the next phase.Still, there are a few challenges with assessing and maintaining many of those standards. The availability of PPE is one, a problem exacerbated by the fact that many manufacturers are located in countries already hard-hit by the virus, in addition to the reluctance of the White House to release nationally-held supplies or invoke executive powers over industrial production.

A similar challenge is the availability of the coronavirus test. While the District has not specifically identified the ability to test all those showing COVID-19 symptoms as a benchmark, it is suggested in the John Hopkins report, which adds testing of close contacts and essential workers. A Harvard University report recommends populations be able to test between two and six percent of their population per day before lifting stay-at-home orders. Based on District population data for 2019, that is between 14,115 and 42,345 people. Bowser said that as of April 23, DC facilities could run just under 3,700 tests each day, with testing at the public health lab expected to double to 1,000-1,300 per day over the next few weeks.

With an insufficient number of tests available, most testing is reserved for at-risk cases, meaning that the true prevalence of COVID-19 is unknown. Nesbitt, echoing Mayor Bowser, said she was still concerned about how to get the type and amount of testing that can demonstrate that the community had reached necessary benchmarks.

What to Reopen, and When?
Healthcare Systems Engineer Julie Swann agrees. The A. Doug Allison Distinguished Professor of the Fitts Department of Industrial and Systems Engineering at University of North Carolina, Chapel Hill, Swann was an advisor at the Center for Disease Control and Prevention during the 2009 H1N1 pandemic. She said that the lessening of restrictions is primarily about the financial and social implications.

“The disease has had just catastrophic financial impact on households and the economy,” she said, “with estimates of the resulting unemployment rate as high as 30 percent. Is the federal government going to pay for food for all of these people?”

In the next phase, many people would go back to work and school, under more relaxed restrictions, but Swann said large social gatherings, such as mass sporting events, festivals or concerts, will probably still be forbidden.

What will open first will vary from state to state, and should probably be dictated by local conditions, Swann said. “Maybe we’ll focus on businesses where there are fewer vulnerable people, there are small sizes of gatherings or there are financial or other implications for society,” she said. Child-care centers, elementary schools and small restaurants might reopen, each with sufficient distancing.

Other businesses that involve close contact between employees and a number of people, such as hair salons, would have to develop appropriate policies to prevent transmission, she said, opening the possibility of a waiver-system for reopening such as Bowser recently created for farmer’s markets in the District.

“I think every sector of our society will need to think about what we have in place to reduce infections,” Swann said.

The initial timing and length of phase two depends on multiple conditions, she added, such as increased levels of testing, conformity to social distancing and the capacity of the health care system, but she said that if the number of COVID-19 in the District peaks in June as is currently projected, phase two could last for months.

Expert consensus so far seems to be that the decision to reopen should be made on the state level, a point made in the John Hopkins Report and an American Enterprise Institute Report on which is it based. On April 16th, the White House presented a three-phase plan for reopening to governors, telling them that the states would “call the shots.”

Local Information, Local Decisions
While DC will make its own decisions, it does not exist in isolation. According to the federal Office of Personnel Management (OPM), in 2017 there were 141,367 federal employees in DC and 282,666 in the metropolitan area. Whether or not that population will be expected to head to the office is a decision that will be made federally. The governors of Maryland and Virginia joined Bowser in writing a letter April 23 requesting that the OPM Director continue stay-at-home policies as they combat the pandemic.

Swann explained that knowing what is happening in Prince George’s County would be more useful for District decision-makers than knowing what is happening in the whole state of Maryland. Cases and deaths due to Covid-19 are being tracked at the county level by The New York Times, but the data is built on inadequate testing. Swann said while national data on influenza-like illnesses could point to potential infections, it is poorly reported on the county level. Too poorly, she said, to ensure that local leaders are making good decisions.

The professor said she is surprised that DC has not reported higher levels of infection. The District, she said, has all the hallmarks for the spread of disease, including a dense urban population, connectivity with other communities and a local population with health vulnerabilities.

“People may go into and out of the community during the day, but then their reporting is attributed to a different state. I think DC may be a hidden hotspot,” Swann said.

Pendulum Swinging Between Phases
Most experts indicate that the possibility of a return to the strict conditions we are currently experiencing should be built into plans, a sort of pendulum swinging between looser and tighter restrictions. The AEI report says triggers for a return include the number of cases increasing over a five-day period; cases that cannot be traced to other known cases; or if hospitals cannot safely treat COVID-19 patients without going back to crisis mode. “We’ll need to get to the point where we can also make local decisions with local interventions, and we’re not close to that yet,” Swann said.

While the standards by which jurisdictions like the District have been sketched out, there remain many questions without clear answers. One thing many experts agree on is that the road out of the current crisis will be a lengthy and bumpy one, and the ‘normal’ we return to may look quite different from the lives we lived before COVID-19 hit.

Bowser has said that the reopening of the District will be a process, but that she is confident in the District’s ability to recover, but also to take advantage of the opportunity to rebuild and address issues that have long been a part of the city.

“As we think about reopening, we also see this as an opportunity not just to go back to the way things were before, but to do and be better than before,” she said. “We have a once in a generation opportunity to reopen our city in a way that builds a more equitable DC, and we should not let this opportunity pass us by.”

Learn more about the District efforts to fight COVID-19 by visiting coronavirus.dc.gov. Read the John Hopkins ‘Guidance for Governors’ at https://www.centerforhealthsecurity.org/our-work/pubs_archive/pubs-pdfs/2020/200417-reopening-guidance-governors.pdf.