On a recent Wednesday morning, six students gathered around the table in art teacher Donna Bonavia’s AP Studio Art classroom and talked about how they had used art to overcome a variety of challenges and obstacles, including gun violence, homelessness, and  depression.

Sketch artist Desmond Curtis, a high school senior and boxer, said that he works out his feelings through his art. “When my brother got shot, he got shot three times. The third time they pronounced him dead, but he came back. They brought him back,” he said.

“But at that time, I couldn’t speak,” he explained. “So, all I did was sit down in the house and draw.”

Curtis is one of 12 students in the senior AP Studio art class at Ballou High School, many of whom say they use art as a tool to cope with their emotions and what is going on in their lives. It’s only one way that art is being used in District schools, where art is increasingly used to teach much more than how to draw. Students are using art as a social emotional tool, to learn subject matter in other classes, and as a support system throughout their school careers.

Social and Emotional Learning
The art room in Ballou High School is filled with student works. Paintings line the walls and lean against windows. Students sit hunched over their work at long tables spattered with paint. Not all of them are formally enrolled in the class. Ms. Bonavia keeps an open door, and many of the artists spend their free time in her classroom, creating. One night they had a sleepover, laying their sleeping bags out on the tables.

Ballou senior Khalyl Harrison is a painter who creates bold, high-contrast work that incorporates text as well as images, Harrison said that his art lets him express himself.

Harrison spent part of his childhood in New York, moving from house to house and occasionally sleeping on the street with a friend. Sometimes, he said, they would eat out of trash cans. He put his feelings about that period of his life in a painting. The work also contains imagery that he says shows the way his mind works. “I think different from other people,” he said. “So, I just basically put it down in a picture.”

Senior Na’Kiya Butler is a skilled painter. In her junior year at Ballou she earned an honorable mention from the Scholastic Art Awards. Her works, which range from realism to expressionism, express emotion in the form of portraiture.

She said she asked to join an art class in the ninth grade because she wanted to actively create. She was fighting depression at the time, and wasn’t speaking to anyone. Art, she said, was the only way for her to speak.

Butler said that her art has been critical to this struggle. “Dealing with depression is really hard. It’s this dilemma that you can’t get out of. Pills don’t work, nothing works, unless you find a way to express yourself.”

Ms. Bonavia said she has seen firsthand how the arts have helped her students overcome unimaginable challenges and process traumatic and often tragic events.

“You could do a story on each one of these kids,” said Bonavia. “These kids are amazing survivors.”

An Aide to Test Scores
At Bridges Public Charter School (100 Gallatin St. NE), kids are using art to learn other subjects, such as science, social studies and English. They do this through art integration projects that are specially designed to teach them both an art form and the course content. Art can also be used to help students engage deeply with subject matter across the curriculum.

Students researched scientific instruments, learning why they were important and what they were used for. Then they learned how to do line drawings of each one. The students each wrote a sentence describing their science tool under the picture, which were assembled into the coloring book and given to the first-grade students.

Anclien said that art integration projects increase student engagement because students learn better when they are doing than when they are passively listening to a lecture. They look more closely at the content while they are learning about it, and remember art projects better than traditional lessons.

“They need hands-on opportunities and they really crave the ability to create things on their own, and I think that’s why arts integration is so successful,” she said.

Art broadly enhances student performance, Anclien said. However, in a time where test scores are so linked to school performance, she finds herself having to convince people that art is useful in teaching core content.

A Pathway for Youth
Other students are dancing their way to success in school. The CityDance DREAM program provides academic support, crisis intervention and college-preparation along with dance instruction to youth living in high-poverty DC neighborhoods.

The DREAM School for Dance (2042 Vermont Ave NW) opened in 2017 and is currently attended by about 60 DC students in grades three through twelve. It offers training five days a week in ballet, modern dance, traditional and contemporary African dance. It is rigorous instruction, and students must pass an audition and an interview before they are admitted.

“We do consider ourselves a training school,” said CityDance DREAM Co-Director Chandini Darby. “Students should not only express a passion or aptitude for dance, but really have a trajectory towards doing this long-term, with an interest in pursuing it at a collegiate or professional level.”

While dance is an ordering principal of the school, it is also a pathway to help students become well-rounded and cultured individuals. The school requires students to maintain a 2.0 GPA or better at school. If grades fall below that mark, academic support is offered. College prep is introduced in eighth grade and is emphasized the summer between sophomore and junior years.

“One of the primary reasons that the school was opened was to create an institution of excellence for students who are marginalized, who are disenfranchised, who don’t have schools or institutions of excellence available to them,” said Darby.

Schools throughout the District continue to recognize the value in integrating art education into more traditional academic teaching and subjects. Recognizing the potential role that arts education can have in student life — even if students are not naturally inclined towards artistic expression — can help open up new avenues towards both academic success, self-discovery, and emotional well-being. 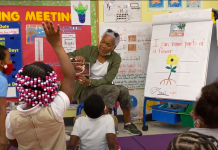 A Different Route to Teaching

What Do Those STARs Mean?