The mission of the DC Department of Government Services (DGS), according to the agency’s website, is “to build, maintain and sustain the District of Columbia’s real estate portfolio, which includes more than 191 million square feet of state-of-the-art facilities in Washington, DC.” The website says further, “This work allows the agency to foster economic viability, environmental stewardship and equity across all eight wards.”

DC residents may not know that the agency spends approximately one percent of its building budget on public art. Murals, sculptures and other public art seen at DC-owned properties such as libraries, schools and parks derive funding from this source.

Sandy Bellamy, a DGS project manager known as the Art Lady by her colleagues, manages this public art program. As Bellamy puts it, creating public art “conserves a legacy of work by local artists that exists beyond the gallery.”

Bellamy’s philosophy of public art is both succinct and eloquent in its approach. As she understands it, while interior designers and architects approach their profession in a structured manner, artists, “being from the community, connect and understand their community and are able to create work in response.”

For the new Barry Farm Recreation Center building, which is a community focal point, Bellamy sought artists from east of the river. The city’s renovation of the center, originally the site of an outdoor swimming pool and playing fields, added an indoor aquatic center and gymnasium and multipurpose rooms and upgraded the playing fields. The facility has been operational since January 2015.

After the city issued a request for proposals targeting artists from east of the river, a panel selected four finalists: Jay Coleman, Rik Freeman, Amber Robles-Gordon and Roderick Turner. All except for Coleman produced two-dimensional works for the center. Each brought their own response to the community center and a distinctive approach to interpreting the meaning of community.

I began my research and interviews for this article three years ago, when the artists had been selected and were creating work now on permanent display. Why so long? Jay Coleman’s massive sculpture finally found its permanent home outside, in the courtyard, after several years of holdups related to finding a local foundry to cast the work, and other administrative hiccups like having a proper certificate of occupancy before installation.

Anchored in concrete and resting prominently in the center of the courtyard, Jay Coleman’s “Communessity” depicts a “fist bump,” popularized by President Barack Obama during the 2008 presidential campaign. The cast bronze sculpture, located between the center’s building and the playing fields, measures 4 feet high, 6.5 feet long and 2.5 feet wide, and sits like a bullseye in a circular patterned patio. Coleman, an artist and a pedagogue, found inspiration in the African proverb “The youth can walk faster but the elders know the way.” Seeking to highlight intergenerational understanding, sympathy and cooperation, “Communessity” depicts two fists, one of a child and one of an adult, in motion, bumping, indicating a partnership between young and old. During my initial interview, Coleman provided another interpretation of his work, suggesting that the bumping represents the transition from youth to old age and humanity’s longevity.

Known for his recounting of history through painting, Rik Freeman created “Ode to Barry Farm,” an acrylic painting 16 feet wide and 7 feet tall. Placed at the entrance of the recreation center, it is visible from the street through the building’s glass front. Paying homage to Barry Farm’s history, Freeman begins with black Civil War veterans and freedmen who purchased land in the area. They famously crossed the Anacostia at night and continued to labor after a full day’s work to build homes on their plots of land. In turn, their purchase of land helped fund Howard University.

Anacostia’s most famous resident, Frederick Douglass, is seen writing. To his right, the circular image of a woman represents Florence Matthews, who was the first director of the Barry Farm Recreation Center. Below, a young man with an orange hat plays on plastic buckets, alluding to the Junkyard Band, which had roots in Barry Farm. The dancing figures represent Melvin Deal and the African Heritage Dancers and Drummers. Above, a man wears a Goodman League jersey, a summer basketball league at Barry Farm Recreation Center. Between the figures, Freeman depicts historic Dale’s Market, which once supplied groceries to the neighborhood. Scenes of present-day Anacostia include a young woman enjoying nature, a farmer’s market and a woman practicing yoga.

Amber Robles-Gordon’s mixed-media collage begins with a serpent. While the serpent may initially conjure maleficent interpretations, most notably biblical, it can also represent rebirth, transformation and even healing, as connoted by the caduceus, symbol of medicine and doctors. In this instance, the serpent, in a masculine form, serves as society’s structure, and intertwined found objects represent the feminine. The artist seeks balance between the feminine and the masculine, between boys and girls. Images of the Obamas and their girls, black Disney princesses, young men playing basketball and football logos strike a balance between the genders.

Roderick Turner created a 4-by-8-foot painting with acrylic on Dibond, an aluminum composite board. Like the piece by Robles-Gordon, it hangs in one of the recreation center’s halls. The size of Turner’s work, coupled with the lack of a frame and the flatness of the Dibond, makes his painting appear more like a mural. Turner sought to create a painting that reflects the residents of the Barry Farm community. After spending time at the indoor pool, he drew studies of the people he encountered, what he witnessed and what he experienced.

Knowing that children may find water intimidating, he painted scenes making water seem less frightening and more inviting. He wanted viewers to see people who mirrored them. Featured prominently in the foreground, three smiling children swim forward underwater. In the background, adults enjoy practicing water aerobics, adolescents gleefully play with a ball and a mother teaches her toddler to relax and float on his back. Turner hopes that the positive imagery will encourage residents to enjoy the aquatic facilities and set aside any apprehensions about encountering water.

The works of Coleman, Freeman, Robles-Gordon and Turner, intended for permanent display, cement the fabric of the community through visual narration, with the recreation center serving as a permanent gallery. As Bellamy sees it, “public art informs our psyche” and, in so doing, offers the public a greater connection with their neighborhood. 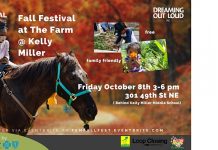 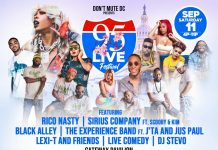 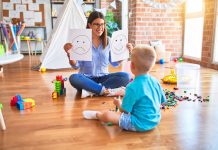