Talking with the members of Capitol Hill kids’ band King Bullfrog is like listening to dueling ukuleles. The two members, Jeremiah Goulka and Steve LeRoy, finish one another’s sentences, talk at the same time, and rib one another about everything.

The two Capitol Hill dads have been performing as King Bullfrog (a riff on “Jeremiah was” from the Three Dog Night song, combined with the translation of Steve’s last name from the French) for families in the District for nearly two years now. The blues-and-roots inspired acoustic duo works hard to engage all of the members of their audience –including the grown-ups.

Making Music — Together
LeRoy and Goulka met in Mister Mike’s Music Together classes, where kids aged 0 to 5 years make music together with their families. LeRoy –a.k.a. ‘Mr. Steve’ was the instructor, and Goulka was part of the class together with his eldest child. When they realized they both played instruments and were interested in performing, they decided to get together to jam.

“Mr. Steve, being a noted asset and treasure of the neighborhood, was being asked to perform at events like Boogie Babes,” said Goulka.

But LeRoy could not accept because, although he played in two other musical groups, he did not have a kids’ band. Not until one day while they were jamming, Goulka made a suggestion. “[He was] like, ‘we should start a kids’ band!’” LeRoy recalled later.

The two say the Music Together theory informs their approach to performances and songwriting by emphasizing the importance of the parent as well as the child, and by eschewing direct pedagogical tunes for lessons hidden in musical stories. Goulka said that their genre is more ‘family’ music than ‘children’s’ music. 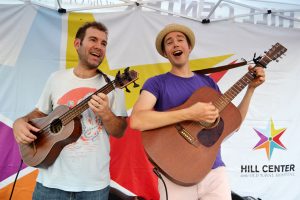 “We’re trying to take grown-ups into account. We make sure that we don’t just throw ‘Old McDonald; and ‘ABC’, –just jam those down their throats,” adds LeRoy. “We actually do those more traditional tunes, but we do it in a way that gets everybody involved or interested, and that would appeal to the old and not just the young.”

For example, the duo introduce the ‘ABC Song’ by telling the story of Ralph, a rabbit who can only remember half of the alphabet. After the familiar ABCs, they launch into ‘Ralphabet,’ a loud and fast tune designed to provide a jolt of energy to the crowd.

“When the beat gets fast and the strumming gets loud, the kids are like “WHOOOOOAAAAAHHHH!!!” and the grown-ups are like, “All right! A SONG!” said Goulka.

Both Goulka and LeRoy have children in neighborhood schools, including Miner, Peabody and School Without Walls (SWS). They say that between the students at Music Together and their children’s schools, they are familiar with many of the kids in the audience at their Capitol Hill shows.

“We used to perform at Peabody and we’d know the kids and be recognized,” said Goulka. “That was a place where we could feel like rock stars, walking around Peabody.”

Living the Dream
The two are managing their lives, careers and dreams, and in many ways mixing them together.

LeRoy has made a career of music. In addition to Music Together, he offers private music lessons while also working as a session musician. He is also a member of two other bands; one performs hit songs at weddings and corporate events, while the other writes and performs original material.

“This is the first time that I’ve been in a kids’ band and it’s been kind of cool,” said LeRoy. “You can only work Friday and Saturday nights in a band for grown-ups, and you’re out until 3 a.m.”

Goulka wears many hats besides the one he is known for sporting at performances. A lawyer by training and a writer by design, he is a Senior Fellow at the Health in Justice Action Lab at Northeastern University School of Law.

“We really like that we’re able to perform around here as much as we can. It seems weirdly serendipitous, that we started doing this thing and now we get paid to do it around our neighborhood for lots of friends,” said Goulka.

The two have a residency at the members-only kids club Skillzone, where they play a monthly happy hour. They also play frequent happy hours at Big Bear Café in Bloomingdale and at The Hill Center.

King Bullfrog can also be booked for school events, fundraisers or birthday parties through their website at kingbullfrog.com 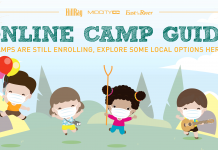 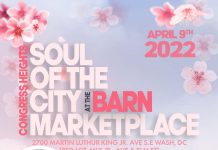 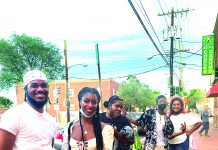