“Wonderment. You can’t buy that,” says Dawn Fox, library associate with DC Public Library (DCPL). The special displays Fox creates for Deanwood Neighborhood Library, she explains, are intended as “something that gets us talking to each other … they’re for ages zero to 100 so that their eyes light up.”

As if on cue, a library patron searching for an electrical outlet notices the National Dinosaur Month display, freezes in mid-search and calls out, “Amazing! Absolutely amazing!”

Deanwood resident Laurie Bowman, a library regular, is delighted by the dinosaur display and adds that her 10-year-old son, Elijah Jenkins, enjoys creating things himself, loves dinosaurs and will be thrilled. “He’s gonna lose it when he sees this!”

The display in question uses a variety of materials to form an environment for plastic dinosaurs. Children in the library’s weekly Makers program explored nearby trees and brush, learning about local plants in the process, to add natural elements to the diorama. Some details – like the glittery “girl” dinosaurs and a matched pair inspired by twins who frequent the library – are more fanciful conversation starters. Others, including a series of laminated trading-card-style illustrations which students can take home, provide more straightforward statistics about specific dinosaur types.

The Entity That Gave Her Life
Fox does not consider herself a trained artist or educator. Instead, the displays she creates grow out of her love for Deanwood, her belief in the power of imagination and her desire to help library patrons of all ages connect with their own creativity.

Prior to joining DC Public Library, Fox worked as a case manager for persons with disabilities. After the recession hit, she was out of work for seven years. During those years, her local library was an essential haven. The library helped with her job search and other resources. Just as importantly, Fox explains, the library offered opportunities to move “beyond walls and circumstances.” With her job at DCPL, she adds, “the entity that gave me life is now where I serve.”

After six months as a floater, working at 20 different locations, Fox was hired full-time at the small library in the Deanwood Recreation Center. She’s been at Deanwood since April 2018.

“Deanwood is such an amazing, vibrant community,” says Fox, who is native to DC but not to Ward 7. “I am happy to serve its residents.” Part of that service, Fox believes, is celebrating the area’s history, geography and culture. To that end, some of her displays incorporate Deanwood details.

History and Future
In December 2018, Fox began building a sort of generic holiday village at Deanwood Library, using a number of pieces she’d purchased – one or two a year, from the old People’s Drug Store – while her children were growing up. She started making the display specific to Deanwood by including bygone local businesses, such as Suburban Amusement Park. She added other neighborhood touches suggested by patrons as the diorama took shape, and researched neighborhood history which she shared with patrons through the display.

Another display recreates the library, down to the book drop outside and individual staff members at the circulation desk. Mr. Lee’s Ice Cream truck, a neighborhood fixture for many years, is also included. A separate structure recreates the old library kiosk, which still stands (long empty) on Sheriff Road.

Fox watches children and adults point to parts of the Deanwood-focused dioramas that they recognize and see their world in a new way. She notes: “It’s important to be able to see where you’re from.”

‘Just Look!’
Beyond conveying information, Fox’s displays are designed to create opportunities for patrons to talk to one another and share their thoughts. What does seeing Deanwood past and present suggest about the future of the neighborhood, the library, books themselves? Her displays and the process of developing them are a chance to spark creativity in others. “Sometimes I’ll be working on something intricate and look up to see people staring. I hope it gives them the idea that they can make things themselves.”

Teenagers, Fox admits, are not the target audience for the Makers program, and not generally enthusiastic about dinosaurs or the content of other displays. Still, she says, they see her working to create something and “realize they can use their own talents.”

Bowman, meanwhile, says that her son comes to the Deanwood Library “mainly because of this sweet lady and her heart – just look at what she did!”

The Dinosaur Month diorama is on display through Nov. 15. The Makers program, for children 5-12, meets Tuesdays at 4 p.m. and explores art, music, science and technology through projects such as making sundials or musical instruments.

Virginia Avniel Spatz is an irregular correspondent for Capital Community News and can be found at www.vspatz.wordpress.com. 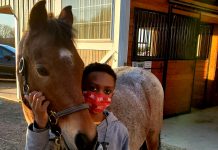 Tall in the Saddle with Serve Your City 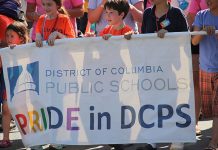 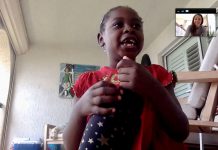 Race For Every Child and Kids Dash