From ward to ward, thousands of workers do their best to get by but can’t make ends meet because their wages are too low for such an expensive city. Most low-wage workers in DC live paycheck to paycheck, and many routinely face difficult tradeoffs between paying for rent and other essentials such as food and diapers. These workers who struggle to meet their needs are people we see every day and who take care of our needs, like child care workers, cashiers, and restaurant cooks. 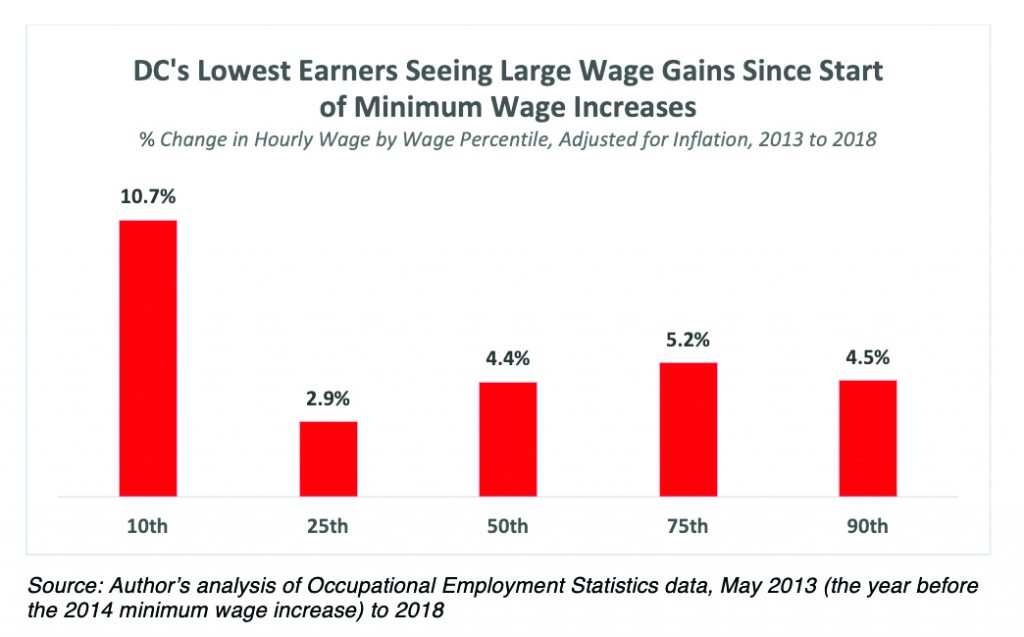 While the District has seen an economic boom, the benefits have not been shared evenly by race and ethnicity or by income level, contributing to widespread income inequality and skyrocketing housing costs that are leaving many low-wage workers financially squeezed. White households have a median income that is more than three times larger than that of Black households in the District — in large part due to the legacy of racism, government-based discrimination, and unequal access to economic opportunity. Income is extremely concentrated too: The top fifth of households hold more than half of all income in our city, meaning they have more income than the bottom four-fifths of households combined. Meanwhile, a worker earning the $14 minimum wage must work two full-time jobs to afford a modest one-bedroom unit at market rent.

Over the last few years, however, lawmakers have taken steps — and some missteps — toward ensuring that hard work pays off, through minimum wage increases and a new paid leave program launching in 2020. Most recently, the District created a voluntary program to incentivize employers to pay their workers living wages above the minimum wage.

Higher wages for workers at the bottom of the income spectrum is good economics. Because lower-paid workers spend a large share of their additional earnings, higher pay can stimulate consumer demand, business activity, and job growth. As such, we all stand to benefit when more workers have a decent paying job and the economy is more inclusive.

Steps and Missteps
In an effort to ensure that the economy works better for more people, since 2014, the District approved multiple increases to the minimum wage, which will reach $15 per hour next July; it will be indexed to inflation after that to help keep up with rising costs. These increases are working and creating more equity: The District’s lowest earners saw a nearly 11 percent increase in hourly wages between 2013 and 2018, more than double the increases for workers at other parts of the earnings distribution (see the chart below).

On the other hand, last fall lawmakers repealed an initiative that would have eliminated the sub-minimum wage so that all workers earn “one fair wage” rather than depending on tips for income. Tipped workers experience a poverty rate nearly twice that of other workers, but states that have adopted one fair wage policies are seeing lower poverty rates for tipped workers.

What is A Living Wage
While the minimum wage is critical to ensuring a fair wage for the lowest-paid workers, it falls short of meeting the definition of a living wage — that is, the wage level needed to afford life’s essentials. Unlike the minimum wage, a living wage provides a more accurate and comprehensive picture of what it takes for a household to afford housing, food, child care, health care, and other necessities. In the District, a worker with two children must make $33.60 per hour to make ends meet, per an analysis conducted by MIT researchers. They estimate that a living wage is $17.76 per hour for a single worker with no children.

Most of the 22 major types of occupations in the District pay a median wage — the wage directly in the middle of the income scale — above the MIT standard for one adult. But five occupations don’t. The median wage is below $17.76 per hour for workers in food preparation and serving, healthcare support, personal care and service, building and grounds cleaning and maintenance, and sales and related occupations. This reflects one-fifth of all jobs in DC.

Encouraging Employers to Pay Living Wages
There is a new program under development that could boost workers’ wages not only in these five industries but others as well — it’s called the Living Wage Certification Program. The District authorized Think Local First, a local non-profit, to run a voluntary program that will certify employers paying a living wage. The primary goals of the program are to recognize employers already paying a living wage, incentivize more employers to increase workers’ wages up to a living wage, and inform customers about which employers pay a living wage. The program holds the promise of promoting a more just economy.

There are various ways to construct a living wage certification program, including the key task of determining the living wage standard to use. While the MIT standard is widely cited, there are others that Think Local First should consider. Think Local first also must decide whether to use one living wage level for all jobs or whether it should be tiered by industry, recognizing that pay standards vary widely across industries. Given that a single worker needs nearly $18 per hour to meet their needs but a parent needs more than $30 per hour to raise a family (according to MIT), the Living Wage certification program should focus more than on the industries with the lowest pay. It would be great if more nursing assistants earn more than the current median of $15 per hour, but wouldn’t it also be great if hotel maids got an increase in their $19.80 median pay?

Think Local First will also have to determine how to treat employers with tipped employees. The program could require employers to make up the difference between the living wage standard and what workers earn from tips plus base pay when it falls below the living wage standard for a given week. Lastly, workers need good wages and good benefits. They will also have to determine how to account for employers that provide benefits such as health care insurance or other benefits.

If designed well, the Living Wage Certification Program could ensure that more workers have jobs with dignity and receive a fair deal. It’s one of the many policy tools that should be part of lawmakers’ comprehensive strategy for improving economic security for workers and non-workers alike.

Tazra Mitchell is the Policy Director of the DC Fiscal Policy Institute (www.dcfpi.org). DCFPI promotes budget and policy solutions to reduce poverty and inequality in the District of Columbia and increase opportunities for residents to build a better future.