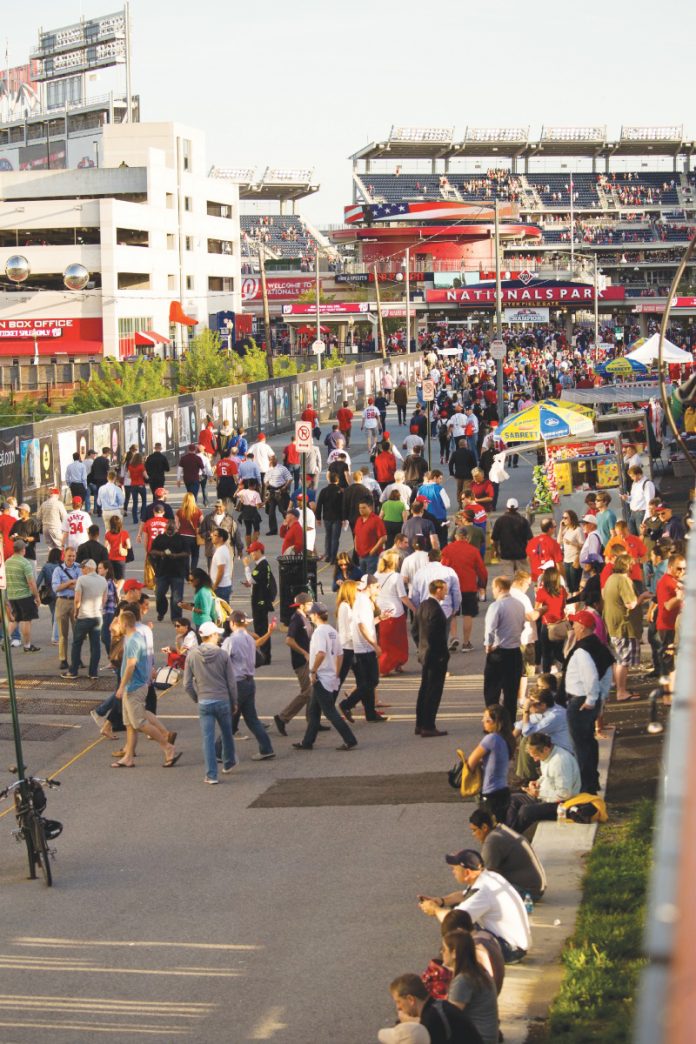 This month we celebrate America’s game: Baseball. The Major League Baseball (MLB) All-Star Game is coming to Nationals Park Tuesday, July 17th, and it’s bringing the party with events taking place all week long leading up to the game. The area will be packed with fans of baseball, beer and good times, so street closures and changes in bus routes can be expected along with a strong representation of fans wearing Nationals red and as well as 2018 All-Star hats, the latter’s design reminiscent of the DC Flag with three stars along each side of the brim.

There will be opportunities to get autographs, ask questions and participate in clinics as well as lots to see and do with about 50 exhibits and attractions like pitching tunnels, batting cages and Hall of Fame displays. Single-day tickets are $35 for adults and $30 for children ages 3-12, but FanFest Monday Madness $10 tickets are available for Monday, July 16, using the coupon code FFMM. All FanFest attractions and autograph opportunities are included in the price of admission.

All-Star fun continues outdoors in The Yards. From 10 a.m. to 7 p.m. Friday through Tuesday, The Yards (First and M Streets SE) will host PLAY BALL Park, a 56,000 square foot interactive area put together by MLB and partners with activities for younger players and their families. At 8 a.m. Saturday, Yards Park will also host the Color Run MLB All-Star 5K, which starts just south of Nationals Park on Potomac Avenue. It begins with a pre-race party featuring music, dancing, stretching and prizes. The run crosses the Anacostia at the South Capitol Street Bridge and re-crosses at the 11 St Bridge, then follows the river and through Yards Park to finish near First and M Streets SE where a stage will greet finishers.

Actual baseball action begins Sunday with an early All-Star double-header featuring the Minor League prospects game and the Celebrity Softball Game, both at Nationals Park. On Monday night, Nationals Park hosts the Home Run Derby, and Tuesday the grand finale, the All-Star Game itself, with an 8 p.m. start.

All-Star balloting began June 1 and continues through July 5 so there’s still a chance for you to cast a ballot at MLB.com for your favorite Nationals player. At press time, Nats star Bryce Harper is third in All-Star outfielder voting.

DPR Gets in the Game
On Saturday, July 14, the District Department of Parks and Recreation (DPR) is throwing the first ever All-Star Music Festival at Randall Field (South Capitol & I Street SW), with food, music and activities to celebrate the District music and arts scene. Guests and performers include Pro Boxing Champions Jarret “Swift” Hurd and Anthony Peterson, R&B artist Levert, Hip Hop artist Ozone and many more. Tickets are free but limited to those who RSVP at allstarmusicfestival.splashthat.com

At 10 a.m. Monday, kids aged 6 to 13 can return to the Randall Field to participate in the New Balance Fitness Challenge, a fitness event led by New Balance sponsored professional athletes to promote fitness, strength and flexibility. All participants will receive a t-shirt and challenge journal. Check-in is at 9:15 a.m. Register at www.nbfitnesschallenge.com/

All this All-Star action happens amid the kind of excitement that has come to characterize Southwest: Capital Fringe Fest is on from July 7 to July 29, running nightly shows at five Southwest venues. Two farmers markets will be open as usual: Market SW from 4 p.m. to 10 p.m. Friday evening and Farmers Market SW from 9 a.m. to 1 p.m. Saturday morning, both located at Fourth and M Streets SW. And check out the numerous art galleries in the area, including the MLB Assembly, an all-day art festival celebrating baseball’s intersections with art, fashion and music, centered at 101 District Sq. SW at The Wharf.

Audi Field Opener
DC United piles on the sports excitement as they play their first official game at Audi Field (100 Potomac Ave. SW) at 7 p.m. July 14thagainst the Vancouver Whitecaps in front of a sold-out crowd. The game will be a party in itself. Audi Field features a fan plaza outside the main gate, a rooftop patio with sweeping DC views, a team store and a rooftop bar.

That party is sure to add to the weekend’s Southwest bustle, though not intentionally. DC United tried to schedule their inaugural game for June 30th, but league conflicts led to it taking place the Saturday of All-Star Week. It is the first of three dates this year when the Nationals and DC United both have games scheduled, the other two being August 19 and September 2.

Getting There
All these events will draw hundreds of thousands of visitors to Southwest and Southeast according to the Executive Office of the Mayor. Parking and traffic restrictions in the area mean that public transit is likely the best way to get around.

Mastercard is sponsoring extended Metro hours after the Home Run Derby (Monday, July 16) and the All-Star Game (Tuesday, July 17), the latter sponsored by Mastercard. The last trains will depart Navy Yard Station at 12:22 a.m. in the direction of Greenbelt and 12:48 a.m. in the direction of Branch Avenue or 30 minutes after the end of the event, whichever is later. During this late service, only Navy Yard Station will be available for entry to the Metrorail system. All other stations will be exit only. WMATA will also run extra trains on the green line before both events.

In the event of a rain delay or extra innings, Metro will provide any updates regarding last train times through ballpark service announcements, on Twitter @wmata and @metrorailinfo and via MetroAlerts email and text messages.

The New Eastern Market – L’Enfant Plaza Circulator route provides regular service to Nationals Stadium via M St. & Half St. SE. Though this route is expected to be modified due to street closures during All-Star week, it will till take riders close to the action and is a good alternative to the Metro.

Event organizers recommend you leave your vehicle at home. But if you must drive, know that driving and parking around All-Star Week venues will be very limited. Traffic will be restricted at Nationals Stadium between South Capitol and Third Streets SE and between I Street and Potomac Avenue SE beginning July 13 and ending on July 17.

First Street and Potomac Avenue SE will be one way, limited to southbound traffic. The streets will be divided into three lanes. The eastern lane will accommodate Hampton Inn’s hotel valet and access to Nationals Stadium Garage C, as well as VIP buses. The center lane will be restricted to emergency vehicles. The western lane will provide access to DC Water, Dock 79 or on bicycles.

Traffic will also be restricted around Audi Field for those dates, between Potomac Avenue and V Streets SW and between Second and Half Streets SW.

The District has created a website, sportscapital.dc.gov, to gather District events and news around All-Star week events. The site advises fans that perhaps the best rubber to burn travelling around All-Star Week events is on the soles of your feet.

“Moving around Washington DC on the dates around the MLB’s All-Star Game and our DC United’s first home game at Audi Field, especially near Nationals Park and the Waterfront, requires patience and a good pair of walking shoes,” the website says. “With hundreds of thousands of visitors expected to join in our celebration of this city’s enjoyment of sports, walking is the best mode of transportation.”

Slugging One Back
All that walking can make a fan thirsty. Fortunately, neighborhood businesses are getting into the swing of All-Star week as well. Jeremy Carman is a co-owner of The Salt Line (79 Potomac Ave. SE), located directly across from Nationals Stadium. He said that All-Star week has been on their radar since the business opened last June.

From Saturday to Tuesday of All-Star Week, The Salt Line will extend their patio into a portion of the neighboring Dock 79 space, expanding the outdoor capacity from about 150 to around 300.

“We’re just really excited,” said Carman. “It’s something we’ve been looking forward to since before construction on the restaurant began.”

In addition to the restaurant’s waterfront views, guests can enjoy comfortable seating, lighted fountains, and other design touches. The extended Salt Line summer garden will have an Airstream trailer outfitted as a bar serving tasty beverages, and an 8-foot boat tricked out as an oyster shucking station in addition to grills offering lobster tails and half-smokes.

Carman said that the restaurant has been fielding inquiries related to All-Star week for the last six months to a year. But they’ve chosen to avoid booking themselves to capacity in advance.

“We want to be open to the faithful, loyal guests that come down here every weekend, every game,” he said. “We’re really looking forward to being part of the culture of the weekend.”

Bluejacket partner and Beer Director Greg Engert has put together a line-up of events all over the city in celebration of MLB All-Star week, with giveaways for beer lovers who manage to hit all five Neighborhood Restaurant Group restaurants (Bluejacket Brewery, ChurchKey, The Sovereign, EatBar and the Partisan).

The All-Stars of Craft Beer will be celebrated throughout the weekend, beginning Friday when Bluejacket Brewery will debut two new DC-themed cans in honor of All-Star Week 2018. Engert said that Bluejacket was prepared for big crowds. “We increased our production as the baseball season began, looking forward to increased crowds and our first can releases. Looking ahead to the All-Star game, we’re brewing even more to make sure we have plenty of cans and kegs for what promises to be a huge week in Navy Yard.”

Over on Barracks Row, The Brig (1007 Eighth St. SE) is putting together a package highlighting ‘baseball beers’ around from around the country.  This includes Blue Moon, initially created for Coors Field, and Devils Backbone, which was initially brewed as Earned Run Ale for Nats Park.  They will be open extended hours from July 14 to 18, including alcohol service from 8 a.m. to 4 a.m. every day.

General Manager Ryan C. Roller said the Brig was really excited for All-Star Week. “DC Sports are quickly changing this year with the Caps raising the Cup, and [with] Nationals Park and the surrounding neighborhoods being featured for four days in a national showcase,” he said. “It’s a really proud moment for the city, for the Capitol Riverfront, for Barracks Row, and for Capitol Hill.”