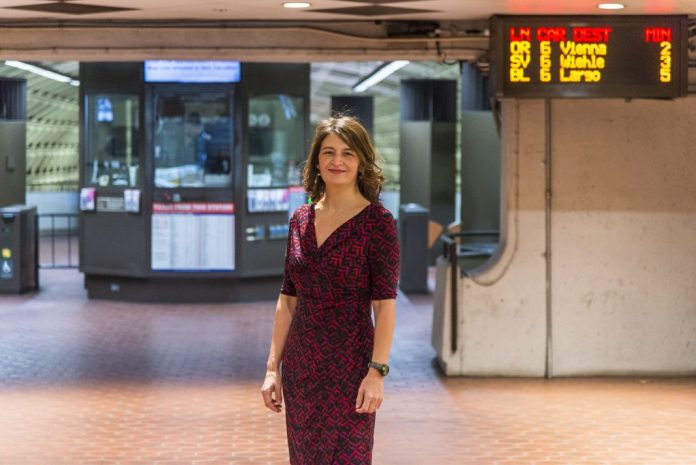 The election of Donald Trump turned many Americans into political activists. Andria Thomas came armed with a PowerPoint presentation. If there’s a will, she believes there should be a feasible, fact-based, actionable way.

The 43-year-old Ward 6 resident of Hill East is running a challenger’s campaign to be one of two DC shadow senators. After nearly a dozen years working on tech startups and as a management consultant in Chicago and Washington, she has acquired analytical skills she hopes to use on behalf of DC rights.

“A management consultant is like a doctor to companies,” she says. “You come in to assess problems, develop strategy, make concrete plans, get buy-in and create partnerships.” She wants to use those skills to help find the right prescription for DC statehood.

After Trump’s election, Thomas founded Resist and Rise (now Indivisible Capitol Hill), a community action group with goals she outlined in her PowerPoint. The lead goal was to defend DC’s right to self-govern. Her group collaborated with Hands Off DC and DC Vote to organize families and children – all dressed in red, the color of the DC flag – to visit Senate offices to advocate for DC rights.

The group’s second goal was to “amplify the voices of other.” While DC’s citizens have no voice in their governance, others do. Thomas wants to get people throughout the US to encourage members of Congress to support statehood for DC. Working with groups such as Herd on the Hill, members of Thomas’s organization help connect constituents with congressional representatives. “They often purposefully leave their mailboxes full,” Thomas says, “so we march into the office with an iPhone and a constituent on the line and ask them to take the call.”

Thomas learned early about the importance of self-governance. She attended H-B Woodlawn, an alternative public high school in Arlington, Va., that had regular “town meetings” on school issues. Students’ votes had the same weight as those of the teachers. “I remember one meeting where we were discussing buying tape recorders for language classes, and the students voted it down,” she says. “They didn’t think that’s what the school should spend money on.”

It was also at Woodlawn – where students called teachers by their first names, were in small classes and were allowed to go barefoot – that Thomas, who says she was an introvert, began to find her voice. “I was so shy when I was young,” she says. “Feeling comfortable speaking with others was a long time coming.” It is a difficult image to conjure up after watching her confident, smooth delivery to potential voters.

Thomas was born in Vietnam to a Vietnamese mother and Foreign Service officer father from Tennessee, two months before the fall of South Vietnam. After tours in Colombia and Thailand, her father took early retirement and the family settled in Arlington.

At the University of Virginia, Thomas was a math and English double major. “They are both useful in critical thinking,” she says. “Literary criticism is a piece of written analysis and math is all about proof.”

Thomas also began to study martial arts as an undergraduate. “That’s where I developed my leadership skills,” she says. With a certain degree of proficiency, students begin to train others. 10 years of teaching myo sim karate is what “forced me out of my shell,” she says.

During a decade in Charlottesville – when she met her husband, scientist Aaron Datesman, while hiking Old Ragg – she worked at tech startups. She went on to get an MBA and an MS in public policy from Carnegie Mellon University so she would be able to make the connection she sought between business and public service.

Trump was elected six days after Thomas gave birth to her second daughter, Minerva, named for the goddess of wisdom. Her older daughter, Magnolia “Maggie,” is six and shares the middle name Caralie with Frances Perkins, the first female US Secretary of Labor. After the election, Thomas says she spent three months “rage tweeting.” Then she realized she had found the way to use her expertise for political action.

“My skills really seemed to fit the need,” she says. “Part of what you do as a management consultant is speak persuasively to others. You have to tell a story, craft a narrative. You look at the evidence then boil it down to a concise summation that people can process. And then you make a plan.”

After maternity leave, she kept up activism for DC rights in her spare time, but says she was getting frustrated. She saw so much opportunity for change and so little happening. “Nothing was going to change unless we changed some of the people in power and changed the ways in which we’re advocating for ourselves,” she says.

She gave notice at Dalberg Global Development and began to look for a job in political advocacy. A few days into her search, she attended DC Council oversight hearings on statehood, where she heard the DC shadow delegation – two senators and a representative – answer questions about what they had done in the past year. “It wasn’t super inspiring,” she says.

No one had filed to run against Sen. Michael Brown in the June election. “Strategic thinking, planning and ability to get things done would really go a long way,” she says. “So why is nobody running?” Just 27 hours after she left the oversight hearing, she was at the Board of Elections picking up the paperwork. Candidates need 2,000 signatures to get on the ballot. Thomas got 4,800 in 13 days.

Thomas is passionate about statehood. “I love DC,” she says. “I love the culture of progressivism. I love the different neighborhoods. I love all the different experiences communities bring to the conversation.”

She says residents suffer from what she calls “statehood fatigue.” They have become complacent, despite recently voting overwhelmingly in favor of statehood. “We have a unique opportunity here that we need to take advantage of,” she says, referring to the new activism and the coming midterm election. “There is now an interest in fundamental democratic rights.”

She says citizens need what in business school is called a “quick win,” something visible. “If, based on our efforts, Marco Rubio (R-Fla.) and Tom Garrett (R-Va.) take back their absurd bills that are trying to effectively nullify DC’s gun laws, I would call that a win,” says Thomas. She also recognizes the need for a robust social media campaign.

The shadow senator is an unpaid position with no real authority, but Thomas, who works part-time for the Leadership Now Project, thinks it can be an effective platform for statehood. Through Resist and Rise, she knows many of the statehood activists, people she hopes to continue to collaborate with if she is elected. She understands she doesn’t need to reinvent the wheel. Plans for achieving statehood exist. But Thomas would like to add new strategic thinking, energy and commitment. She would like to add her voice.

Celebrate Your Grads in East of the River