It has always been pretty clear that to restore the Anacostia the way we all want and hope requires a lot of work on the streams feeding it from upstream as well as those entering into it from here in the city. Prince Georges and Montgomery counties have been doing their share, working with citizen groups along nearly all the major streams. In the District, the job has two pieces. In the parts of the city served by combined sewers, the effort has been by DC Water to build tunnels to hold stormwater and prevent overflows into the river. In the parts with separate sewers, however, where the streams are handling the stormwater and can be restored, the job has gone to the Department of Energy & Environment (DOEE).

The restoration of Watts Branch and the construction of the Marvin Gaye Trail in Anacostia was one of the first DOEE projects. More recently, Pope’s Branch has been beautifully rebuilt through a wooded ravine. But the most exciting project, the one that really uses state-of-the-art techniques and can use your on-the-ground help as well, is the restoration of Springhouse Run in the National Arboretum.

A little history about the project. It began as an effort to restore Hickey Run, known as the largest source of toxic pollution to the Anacostia. Hickey enters the arboretum as a storm sewer under New York Avenue, draining a large industrial and residential area to the north, including the enormous Metrobus service yard on Bladensburg Road. A large facility to remove toxics and trash from the water right where it enters the arboretum was built with EPA and city funds.

But removal of those pollutants revealed a major raw sewage signal that was ultimately traced to a large number of illicit connections of sewage lines to the storm sewer. While that was being addressed, it was decided to turn efforts to Springhouse Run, a major tributary of Hickey that also comes into the arboretum as a storm sewer under New York Avenue. The idea was to learn from Springhouse and go back to Hickey with the lessons. And a lot has been learned!

DOEE used the EPA grant to contract the restoration work, and the winning proposal was by Underwood and Associates of Annapolis. They inherited a storm sewer that ran in a concrete channel past a separated pond and for a quarter mile through woods and fields past a borrow pit and into Hickey Run.

What they made of it is a broad valley of pools and riffles and underground water moving through the soils and cleaning itself of excess nutrients and sediments. The ponds are reconnected as part of this regenerative design and play a key role in the cleansing of the waters.

According to Keith Underwood, founder and principal of the contractor, “the science of ecological restoration is still an art, and a project like Springhouse requires a hundred decisions a day.” What he appreciates is the flexibility of the DOEE and the arboretum to let him do the right thing as the site and the conditions demand. To him, “the least disruptive option is the regeneration of the traditional roles of the stream,” moving and cleaning the water and providing habitat. But in order to do that he needed to remove and replace not a hundred truckloads of contaminated soil under the site, as originally estimated, but a thousand. He also decided to add a series of swales and berms to slow and absorb the runoff from New York Avenue, not originally part of the project.

The result is a new system that takes the water coming from the storm sewer, runs it through stone and underground, adds the slowed runoff from New York Avenue and surfaces it to join the reconnected pond. In doing this, it passes by the original “springhouses,” two round brick structures that served as one of two sources of spring-fed bottled water in the District in the early 20th century. From the pond the waters flow through the ground and over rocks to a broad valley with pools of water separated by occasional surface water riffling down and, more often, by areas where much of the flow is underground.

This has made the project partners very excited. Tommy Wells, the director of DOEE, says that “the Springhouse Run restoration is one of my favorite projects; turning drainage ditches back into natural streams helps to coax nature back into providing the functions needed for a sustainable environment.” Tom McGuire, executive director of the Friends of the National Arboretum, points out, “Watching a stream be transformed from a gravel-lined ditch to a natural watercourse where plants and soils are cleaning the water is the sort of experience that can shape a child’s view of the world and foster a lifelong interest in nature and plants.”

According to Underwood, the reason this ecological restoration will perform is due to the material brought in to replace the soils – with the emphasis on stones, gravel and wood chips. The first two help move the water down into and through the ground. In addition to wood chips, he has scattered tree trunks and limbs throughout the site. “Organic carbon is the foundation of the aquatic food web,” he says. “The biological processes that initiate the regeneration of bacteria for microscopic feeders need carbon to get started.” Those microbial habitats are the key to reducing nutrients and controlling sediments.

Another effect of moving so much water through the ground is that occasionally it returns as a spring and joins the stream on the surface. Underwood notes that with this, “the springs are back at Springhouse Run.” As are the river herring. Native to these kinds of streams, it took only a matter of weeks before they found their way upstream from the Anacostia and settled into their new home.

According to Wells, “Keith Underwood approaches his work like a ministry. He is recreating habitat in a way that not only looks incredibly natural but cleans the water for the Anacostia River and creates a new home for local wildlife.”

But the story is not over, and this is where you come in, dear reader. This beautiful new stream valley needs to be preserved, and the best way to do that is by setting out native plants. Over 25,000 of these were collected for the project by arboretum staff at sites all over the region, with the help of volunteers from area garden clubs. Seven thousand of these plants, mostly sedges along the open water and shrubs and trees that could survive the winter, were set out last fall by volunteers.

The remaining plants are in the arboretum greenhouses, waiting for spring. Setting these out all over the valley is something you can help make happen. To join other volunteers from throughout the region, call the office of the Friends of the National Arboretum at 202-544-8733 and join the list to be notified when the planting dates are set. Then you can be part of this magnificent project to help Our River. As McGuire says, “Springhouse’s restoration won’t be done unless we can mobilize the communities around the arboretum and beyond to help complete the job.” 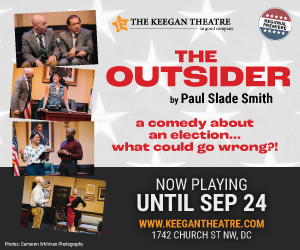