To recognize the bicentennial of the birth of Frederick Douglass, community-based programs and events are happening throughout Washington and surrounding areas this month and throughout 2018.

On Wednesday, Feb. 14, at 11a.m., I will join Congresswoman Norton, Ken Morris Jr., the great-great-great grandson of Frederick Douglass, great-great grandson of Booker T. Washington and president of the Frederick Douglass Family Initiatives, and Frank Smith, director of the African American Civil War Museum, at Ron Brown Preparatory High School. The program, held at the school named for former Commerce Secretary Ron Brown, is in Ward 7 at 4800 Meade St. NE and is free and open to the public.

Norton was appointed by House Democratic Leader Nancy Pelosi (D-Calif.) to serve on the Frederick Douglass Bicentennial Commission, which was established by a bill that Norton introduced. Another Norton bill placed a statue of Douglass in the Capitol, representing the District of Columbia, making DC the only jurisdiction that is not a state with a statue in the Capitol.

The bicentennial commission will plan, develop and carry out programs and activities to honor and celebrate the life of Frederick Douglass, the country’s greatest slavery abolitionist, during the bicentennial anniversary of his birth in 2018.

Lincoln-Douglass Debate Imagined at National Archives
On the evening of Thursday, Feb. 22, the National Archives at 700 Pennsylvania Ave. NW will host an unusual and lively performance featuring Abraham Lincoln (portrayed by George Buss) and political opponent Stephen A. Douglas (portrayed by Tim Connors) as they look back to their famous debates over slavery and equality in the 1858 US Senate campaign in Illinois. Following the first debate will be an “Unknown Lincoln-Douglass,” an “imagining” of a debate between Lincoln (as portrayed by Buss) and Frederick Douglass (portrayed by Phil Darius Wallace).

After the talk, visitors are welcome to tour the home and learn of Woodson’s connections with Douglass and Howard University. This event is first-come, first-served, limited to 25 visitors. For more information call 202-426-5961 or visit www.nps.gov/cawo/.

Art Exhibit and Bicentennial Events in Annapolis
On Saturday, Feb. 17, from 3 to 5 p.m., the Banneker-Douglass Museum, at 4 Franklin St. in Annapolis, will host an opening reception for “Bent, Not Broken,” a unique and timely exhibit by Maryland artist Ulysses Marshall which captures Frederick Douglass’ spirit through a highly expressive mixed-media composition. Marshall’s colorful and poetic collages are delivered with blunt sincerity and talk of the glory, the pain and the hope in Douglass’ life and in the African-American experience.

On Friday, Feb. 23, from 2:00 to 3:30 p.m., in the Maryland State Legislative Services Building-Joint Hearing Room in the Maryland State House, European Douglass scholar and author Prof. Celeste-Marie Bernier will give a lecture. She will present her latest work on Frederick Douglass and his family using previously unpublished family scrapbooks from the Walter O. Evans Collection (1818-2018).

New Douglass Mural
During the week leading to the birthday celebration, muralist Rebeka Ryvola will be working with community members and school-aged children to install a new mural honoring Frederick Douglass and his friends at the newly renovated corner store at 16th and W streets SE, down the street from the Frederick Douglass National Historic Site.

Ephrame Kassaye, the new owner of the store, has supported an effort to create an honorific and community-based mural on the 16th Street side of his building, similar to the mural of the 1963 March on Washington on the side of a building he owns at the corner of Martin Luther King Jr. Avenue and Mellon Street in Congress Heights.

The mural, “Spread Southside Love,” recreates an imaginary Sunday literary salon on the back lawn of Cedar Hill. Captured in the public artwork is the historic home, with the Anacostia River, DC Capitol and Washington Monument in the background.

Ryvola, who has worked with the Anacostia Watershed Society, will begin mural installation on Tuesday, Feb. 13, and plans to work through Saturday, Feb. 17. Students and families from DC Prep’s Anacostia Elementary Campus and Ketcham Elementary School are encouraged to assist with creation of the public mural. Those interested please call 202-236-3413.

For more information on the mural visit http://rebekaryvola.com/#/frederick-douglass-mural-commission/.

An exhibit documenting the presence and importance of Frederick Douglass murals in Washington and the relationship Douglass had with the DC Public Schools is being planned for the fall at the Charles Sumner School Museum and Archives.

For more information about events planned for the bicentennial from DC to Baltimore to Talbot County to Rochester, please visit https://thelionofanacostia.wordpress.com/.

John Muller is the author of “Frederick Douglass in Washington, D.C.: The Lion of Anacostia” and has been providing walking tours of Anacostia for the past five years. 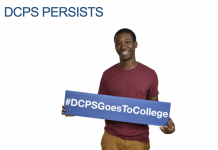