At the RFK City-Wide Redevelopment Meeting held Wednesday evening at St. Luke’s Parish (4925 E. Capitol St. SE), Events DC introduced a timeline and schematic plans for the first phase of the short-term plans for the stadium site. The first phase calls for multipurpose recreational fields for lacrosse, soccer and little-league baseball and features green space, a playground, restroom facilities and a pavilion.

RFP in next two weeks

Events DC presented a rendering of the site, noting that a set of schematic designs and specifications have been created. Representatives of Events DC said the RFP for design-build services, which would take the designs to a permit set that would inform the project, would be issued by the following week. The agency expects to award the contract sometime in Spring 2018. Ideally, permit approval would take place in Summer and the fields would be open for play in Spring 2019.

The fields are the first component of the RFK Stadium Campus short-term, or ten-year, plan that has been given a timeline for completion. The short-term plans were first presented in January 2017. The short-term plans contain five components: the multipurpose fields, a market hall, a sports and recreation complex, pedestrian bridges connecting the west and east banks of the Anacostia River to Heritage and Kingman Islands, and a new memorial site for Robert F. Kennedy, for whom the stadium is named.

In consultation with Capitol Riverside Youth Sports (CRYS), the programming for the fields has been expanded from the original plans. The fields were enlarged to accommodate multiple games, and will include two full-sized artificial turf soccer fields, an artificial turf field that can be used for soccer or lacrosse, including two youth baseball diamonds.

The site includes storage and maintenance buildings as well as restroom buildings, a new celebration pavilion and a playground for children, as well as open landscaped greenspace and parkland. The fields are to connect to the Anacostia Riverwalk Trail and pedestrian bike paths.

Events DC provided an update on plans for access to the campus. The access road connecting the site to Oklahoma Avenue now runs along the northwest side of the site. Concerns had been expressed by the community about the access road running along the Anacostia River. “This provides the same access,” said a representative, “but it actually minimizes the amount of construction that we have to implement as part of this project and it maintains the connectivity not only to this project but to future projects.”

Bioretention facilities and park space are spread out throughout the field, and a Celebration Pavilion is located at the center of the site. Representatives said the space could be used for community events and to support tournament trophy ceremonies and as a temporary food and beverages pavilion. The 314 existing parking spaces would be milled and overlaid as part of the project.

Thirty minutes were included for questions at the meeting, during which queries about the potential for an NFL stadium on the site were posed. Issues of accessibility from across the Anacostia River were raised by Advisory Neighborhood Commission 7F Chair Sheila Carson-Carr.

At the meeting, Events DC President and CEO Gregory A. O’Dell noted that preliminary work had been previously done on a preliminary long-term vision for the site that included different anchor tenants. The three possible scenarios formulated included one with a football stadium, another incorporating a 20,000-seat arena, and a third possibility with neither of those. That long-term process has been stopped, O’Dell said, in favor of a focus on the short-term elements that the community, city and region could enjoy more immediately.

This story also appears on the Hill Rag web page. 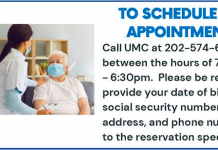