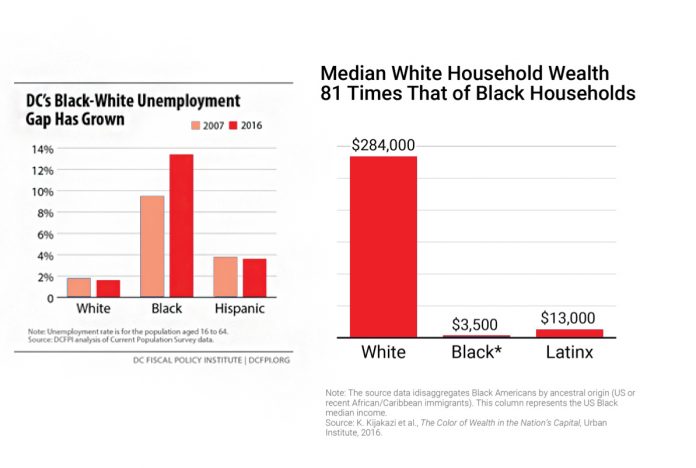 The District of Columbia is changing before our eyes, daily and dramatically. We are an increasingly vibrant and prosperous city. Yet this growth is threatening the ability of many residents to stay here. In particular, black residents, including many who have lived their entire lives in DC, are not benefiting from the city’s growth. While DC’s overall population is growing, the number of black residents is falling, and many who are still here face enormous economic challenges.

The District has always had deep racial inequities, reflecting our nation’s history but also our local history of segregated schools, lack of home rule, longstanding congressional oversight by southern politicians, and discrimination in access to housing and good jobs.

The impacts on the economic circumstances of black Washingtonians are clear, as highlighted in recent reports from Georgetown University and my organization, the DC Fiscal Policy Institute (DCFPI). The median income of black households is just $38,000 – one-third the median white household income. And the median wealth for black residents is just $3,500, meaning that many have not been able to accumulate any assets.

This also means black residents are unable to take advantage of the city’s growth and in many cases have become its victims. Spreading gentrification is making DC increasingly unlivable for many black residents and other people of color, communities that have shaped DC’s history and cultural vitality. Rising housing prices are leading to displacement. With limited wealth accumulation, black residents are not well represented among the growing number of small businesses in many communities.

These are signs that we need to be doing more as a community to ensure that everyone is benefiting from DC’s prosperity.

Unemployment Not Falling Fast Enough for Black Residents
DC’s black residents continue to experience elevated rates of joblessness since the Great Recession of almost a decade ago, even as unemployment overall continues to fall.

This racial unemployment gap even affects residents with an advanced education. Unemployment has not fully recovered for black college graduates, while it has for others.

Black Households Aren’t Seeing Income Gains
The barriers that have prevented black residents from getting a toehold in the DC economy are evident in the latest figures on income, poverty, and wealth. The median income of black households in the District is just $38,000 – too low to adequately make ends meet in one of the most expensive cities in the nation – compared with $127,000 for white households. The poverty rate among black residents, 28 percent, remains higher than before the recession, and 9 percentage points higher than DC’s overall poverty rate. (The poverty rate among Latinx DC residents is also high, 18 percent, and worsened over the past year.)

The median black household has a net worth of just $3,500, according to researchers from the Urban Institute, while the median white household has wealth of $284,000.

In a strong economy, these widening disparities show how far DC has to go toward breaking down the barriers to economic opportunity.

Rising Housing Prices Are Squeezing Many Black Residents
The systemic racism that has held back income and wealth for many residents is now compounded by increasingly unaffordable housing costs. The disappearance of low-cost housing is leaving the city’s extremely low-income households financially on edge, and it poses serious risks to the ability of families to afford enough food, for children to go to school ready to learn, and for adults to get and keep a job.

There are now 26,000 DC households with extremely low incomes (below 30 percent of the area median, or $32,000 for a family of four) who spend more than half their income on rent. Nearly all of these households, 91 percent, are black, and the rest are primarily Latinx.

Paying a large share of income for housing leaves families financially on the edge, at elevated risk of getting evicted, moving frequently, or becoming homeless, and often forcing them to cut back on groceries and put off medical appointments. Families without affordable housing spend $150 less per month on food than others. Children in severely rent-burdened families or in overcrowded conditions are more likely than others to fall behind in school and drop out.

Promoting Racial Equity amid Prosperity
The District needs to commit to a vision of economic growth that benefits everyone and leaves no one behind. We should pursue this with an explicit goal of reducing long-standing racial inequities that make black residents and other communities of color especially at risk from gentrification. We are uniquely able to make this a reality. DC’s prosperity allows us to make investments many other communities cannot.

Taking on these challenges is critical to the District’s future, and there is an urgency to act now. Investments in stable housing, good schools, and good jobs will give families and children the tools they need to succeed and help make sure that a child’s future is not dictated by their ZIP code. We will feel stronger as a community knowing that DC’s growing economy is being harnessed to help everyone.

Ed Lazere is executive director of the DC Fiscal Policy Institute (www.dcfpi.org). DCFPI promotes budget and policy solutions to reduce poverty and inequality in the District of Columbia and to increase the opportunity for residents to build a better future. 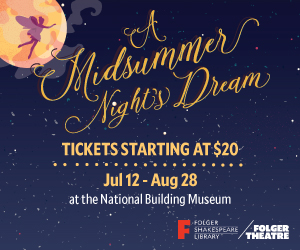