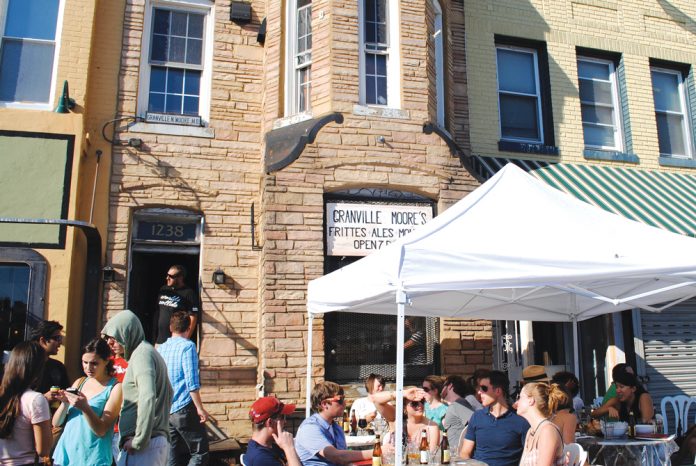 While October’s weather can be a gamble in the District, there are plenty of great ways to get into the fall spirit. This month we’ve got frightful films and plays to thrill and chill as we welcome Halloween. If you are more inclined to simply chill, pay a visit to a newly opened natural wine bar, or relax over a steaming bowl of mussels at Granville Moore’s.

A Home for Natural Wine
Dio Wine Bar (https://diowinebar.com, 904 H St. NE), which takes its name from the Greek god of wine, Dionysus, recently opened its doors and welcomed patrons eager to explore the world of natural wines.

Natural wines can be a little wilder and even funkier than conventionally produced wines. They are made with organically grown grapes. Producers avoid or limit introducing some additives often used in the production of modern wines. This can mean that some natural wines may appear a tiny bit cloudy or have a discernible fizz that tingles on the tongue. I stopped in for Dio’s soft opening during the H Street Festival and enjoyed a glass of the 2015 pinot gris from Omero Cellars ($13 a glass).

Dio will serve a variety of natural wines by the bottle and by the glass. In addition to wine, Dio will offer a smaller selection of beers, ciders, and cocktails. The menu consists of cheese and charcuterie plates, as well as some more substantial plates.

Theater and Film for the Halloween Season
We’ve got a fine selection of local theater and film screenings to get you into the Halloween spirit this October. Let the Atlas Performing Arts Center, Capital Fringe, and the Angelika popup at Union Market draw your attention to the things that go bump in the night.

Alfred Hitchcock fans will want to snag tickets to the five films screening this month at the Angelika popup (https://www.angelikafilmcenter.com/dc, 550 Penn St. NE) as part of Hitchcocktober. Every Thursday in October, you can catch a different treat from the Master of Suspense. This year’s selections include “North by Northwest,” “Notorious,” “Vertigo,” and “Rebecca.” The series culminates in a special Halloween night screening of “Psycho.” Tickets for each show are $10.

You’ll feel the tension in the air when Pinky Swear Productions (http://pinkyswear-productions.com) brings Natalie Piegari’s “Safe as Houses” to the stage at Capital Fringe (https://www.capitalfringe.org, 1358 Florida Ave. NE). A violent storm portends more than just rain when it rolls into the lives of a suburban family. As the clan weighs the potential for dangerous flooding, a knock comes at their door and brings one member’s past roaring into the present. Tickets are $35, and the show runs Oct. 19 though Nov. 11. There’s a special pay-what-you can performance on Oct. 18.

Rorschach Theatre (www.rorschachtheatre.com) will stage two performances in one night of “Klecksography: Toil and Trouble,” at the Atlas Performing Arts Center (www.atlasarts.org, 1333 H St. NE). “Klecksography” is Rorschach’s annual rapid-fire new play development event in which seven brand-new plays by local writers are written, rehearsed, and produced in just seven days. This year’s works conjure up seven new stories of witches both familiar and forgotten. Tickets for both Oct. 28 performances are $20 ($15 for students and seniors).

On Oct. 29, the Atlas will present a double bill of two spooky silent films, “The Cabinet of Dr. Caligari” and “The Devil’s Assistant.” Pianist Andrew Earle Simpson (http://andrewesimpson.com) has composed new musical works that he will perform during the showings to enhance the on-screen drama and suspense. The popcorn is free for this special pre-Halloween event, and audience members are encouraged to come dressed in costume.

“The Cabinet of Dr. Caligari” (1920), often considered the first horror film, spins the tale of an insane hypnotist, somnambulist Cesare, and a series of mysterious murders. “The Devil’s Assistant” (1917) is a lesser-known dramatic short that tells the story of a doctor who takes terrible revenge on a woman who jilted him. The film features a nightmarish, red-tinged depiction of hell in which a demon stirs a cauldron of morphine as condemned sinners struggle in vain in an infernal lake. Tickets for the Sunday afternoon show are $20 ($18 for students and seniors).

If your Halloween planning leans more toward pumpkins and decorative gourds, don’t forget that the FRESHFARM Market (http://freshfarm.org/h-street-ne.html) at 13th and H streets NE is an excellent place to pick up both while supporting local farmers. You can even snag a bottle of local apple cider. The market is open every Saturday from 9:00 a.m. to 12:30 p.m.

Granville Moore’s Changes Hands
Much-loved local Belgian gastropub Granville Moore’s (www.granvillemoores.com, 1238 H St. NE) recently announced a change in ownership, but the hands taking the reins will be familiar to H Street regulars. Ryan Gordon and Roneeka Bhagotra, who own and run nearby British pub the Queen Vic (www.thequeenvicdc.com, 1206 H St. NE) will now oversee daily operations at the restaurant. Executive chef Teddy Folkman will continue in his role and also maintain an ownership interest in the restaurant. Folkman plans to relocate to North Carolina at the end of this year but will return monthly to update the menu.

The food and drink menus will not undergo major changes as a result of the shift, so Granville’s will continue to serve their fabulous mussels and offer a topnotch selection of hard-to-find Belgian beers. Bhagotra told me they plan to do a bit of “tightening up” to “streamline things a bit” and make Granville Moore’s “the institution it deserves to be.” A bowl of mussels paired with a Belgian brew sounds like a great way to move into fall.

For more on what’s abuzz on and around H Street NE, you can visit my blog at http://frozentropics.blogspot.com. You can send me tips or questions at elise.bernard@gmail.com.