E Is for Earth
“Do you see yonder cloud that’s almost in the shape of a camel?” Hamlet asks Polonius. “’Tis like a camel indeed,” Polonius concurs. Then Hamlet looks again. No, he says, it’s more like a weasel. Or perhaps a whale. “Very like a whale,” agrees Polonius.

Looking up at the sky and transposing nature onto what we see there has transfixed us for centuries. But what if we were able to look down through the clouds instead of up at them? Imagine what flights of fancy Hamlet might have undertaken had he been able to soar above the earth.

In “ABCs from Space: A Discovered Alphabet,” Adam Voiland has done just that. A writer for the NASA Earth Observatory, he has used satellite imagery to create an alphabet book using features provided by Earth itself. From Norwegian fjords (“E”) and a tropical storm (“G”) to a burn scar in a forest in New Mexico (“J”) and a crack in the Arctic Ocean ice (“W”), these awe-inspiring images not only teach the alphabet, but they also reveal much about our planet. (Did you know, for example, that nature apparently abhors an “R”?)

Voiland looked at thousands of images in his quest, exploring “some of the most fascinating and beautiful places on our planet.” His work has paid off in an exquisite picture book that also provides detailed descriptions of the sites shown, pinpoints their locations on a world map, and offers FAQ sections on the images and on the science of clouds, rocks, rivers, and fjords, as well as a glossary.

While “ABCs from Space” is intended for children ages four to eight, readers of all ages will enjoy guessing what the images are – or simply losing themselves in the meandering rivers and swirling clouds of Voiland’s cosmic alphabet.

In addition to his work for NASA, Voiland is a writer for Science Systems and Applications Inc. and was previously a medical reporter for US News & World Report. Find him at www.adamvoiland.com or @avoiland via Twitter.

Split Down the Middle
When Norman Metzger was three years old, his world was torn apart. In “Separation and Remaining: Families in Nazi Germany,” he tells the story of how his family was irrevocably damaged by the horrors of World War II. Cast as a “fictional recreation,” the book imagines the dialogues, thoughts, and conversations that swirled around him as a child – or, in his reconstruction, as a boy called Norbert.

It was 1940 and Norman/Norbert was living in Frankfurt am Main with his father, mother, and sister. His mother was Aryan, but his father was Jewish, and it was not a good time or place to be a Jew. His father finally got permission to leave Germany with his eight-year-old daughter, but Norbert and his mother stayed behind to ensure they would not lose their apartment and possessions.

“It was a terrible ordeal for the family, but the right thing to do,” Metzger writes. But how to explain to a little boy why his father and sister had to leave – and why there were people who hated him and wished him ill?

Norbert and his mother survive the bombings, the hours in the fetid basement shelter, the specter of neighbors disappearing in the middle of the night, the suicides. In America, his father struggles to learn a new language and reestablish the textile business that was taken from him in Frankfurt. His sister becomes a teenager, striving to fit in to a new society. Eventually, the war ends and the family is reunited. But six years of separation have created rifts too deep to mend. The marriage does not survive.

The story is an achingly painful one, but for the author, telling it had its rewards. “I didn’t know my father,” writes Metzger, “and oddly enough through this work of fiction I came to know him for the first time. And certainly much better understood my mother. And, not least, myself. A reward I treasure.” Readers will also treasure, and find current-day resonance in, this child’s-eye view of how unreasoning prejudice can threaten to destroy innocent lives.

Prior to retirement, Norman Metzger was a writer and editor for the American Association for the Advancement of Science and the National Academy of Sciences. He is active in preservation efforts on Capitol Hill, where he moved from New York City in the late 1960s. Find him on Twitter @CHNorm.

The Library of Congress presents Rick Riordan kicking off his 2017 book tour and release of “The Ship of the Dead,” book three of his “Magnus Chase and the Gods of Asgard” series, Oct. 3, 10:30 a.m., and Chrissy Arce, author of “Mexico’s Nobodies: The Cultural Legacy of the Soldadera and Afro-Mexican Women,” Oct. 12, noon. www.loc.gov

The Hill Center hosts a “Talk of the Hill with Bill Press” with New York Times reporters Peter Baker and Glenn Thrush, Oct. 3, 7 p.m.; author Charity Tillemann-Dick (“The Encore”) in conversation with NPR’s Scott Simon, Oct. 5, 7 p.m.; and “The Life of a Poet” with Dawn Lundy Martin in conversation with Ron Charles, Oct. 23, 7 p.m. Free but register at www.hillcenterdc.org or 202-549-4172. 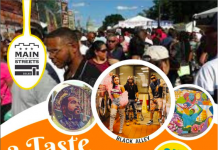 Theater: John Brown’s Raid – You Are There. What Now?