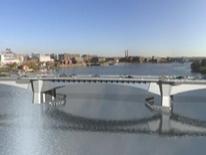 The new Frederick Douglass Memorial Bridge is part of the South Capitol Street Corridor Project, the largest construction project in the history of DC Department of Transportation (DDOT). The project includes replacement of the 68-year-old Frederick Douglass Memorial Bridge and reconstruction of the Suitland Parkway/I-295 interchange. The new Frederick Douglass Memorial Bridge will be built approximately 100 feet from the current bridge.
The South Capitol Street Corridor Project is one in a series of transportation, environmental, economic, community and recreation projects developed by the larger Anacostia Waterfront Initiative (AWI) Program. From the Tidal Basin to the city’s northeast border with Maryland, the 30-year, $10 billion AWI Program is transforming the shores of the Anacostia River into a world-class waterfront and enriching nearby communities. Read more at ddot.dc.gov/page/south-capitol-street-corridor-project-frederick-douglass-memorial-bridge.