The American College of Sports Medicine has ranked DC one of the fittest cities in the nation. But this year, after holding the title for three years, DC was edged out of first place by Minneapolis. The ranking takes into account rates of smoking and cardiovascular disease deaths, consumption of fruits and vegetables, per capita expenditures for parks, and reported physical activities.

Our score isn’t because of the influx of summer interns who hit the gyms, pools, and softball fields. It is actually the number of residents, many over age 50, who use parks, trails, and year-round exercise opportunities that secured our win. For one thing, Mayor Muriel Bowser eliminated the fees at the city’s Department of Recreation centers, and that has opened the gyms and equipment to more residents. The Office of Aging has opened wellness centers in each ward that offer an array of services to help residents over 65 achieve improved health and meet the physical activity guidelines set out for their age group by the Centers for Disease Control and Prevention (CDC).

According to the CDC, if you are over 65 and are generally fit, you should be spending two and a half hours a week on moderate-intense aerobic activity and two days a week working on activities that are muscle-strengthening. Yoga, gardening, lifting weights, or using resistance bands are considered muscle-strengthening activities. A brisk walk or any activity that makes you breathe harder and your heart beat faster are counted as aerobic.

Luckily for older DC residents, there are so many different ways to get in that exercise. The real difficulty is narrowing down the choices. There are free yoga classes at the local libraries and some churches; free indoor pools at the William H. Rumsey Aquatic Center next door to Eastern Market and at the Therapeutic Aquatic Center, 3030 G St. SE; and weight and fitness rooms at recreation centers like the Sherwood Recreation Center near H Street NE. Lacing up a pair of running shoes and taking a brisk walk around the park will also do.

For some, joining a gym like the Sports and Health Club, formerly Results gym, provides activities to participate in under the supervision of certified trainers and instructors. There are many different combinations of memberships that can make it affordable to join as a retiree.

Despite the many facilities available, it is easy to put off physical activity as you age. Finding an activity that is fun and gets you out in the community not only is physically good for you, but there are also the benefits of making friends and socializing. Having company certainly makes exercising feel less like an onerous task. If you enjoy being on a softball team, basketball team, even hockey team, there are local leagues that accommodate older players. The East Potomac Tennis Center at Hains Point hosts a seniors’ league that plays on Wednesday and Friday from 12:30 to 2:00 pm. Many retirees look forward to hitting the links to play golf that is reasonably priced and fairly easy to reserve.

Since summer is upon us, we feature three activities that you might not have thought of – petanque, hiking, and slow-pitch softball.

Petanque
Every Monday afternoon at 3, year-round, a group of Hill retirees meets in Garfield Park, located at South Carolina Avenue and Fifth Street SE, to play friendly rounds of a game named petanque (pay-TONK). Some describe the game as a cross between horseshoes and Italian bocce ball. It was created to be a social activity that all can play, and that certainly is the atmosphere among the Capitol Hill players.

In petanque, a participant throws three hollow steel balls, or boules, as close as possible to a small wooden ball, the jack or cohonnet (piglet). It is totally fair to try and knock opponents’ balls away from the jack. After everyone has thrown, the ball closest to the jack wins a point. The game is played to 13 points. With three to four players per team, one game can take about an hour to complete. In the game I watched, only a few times did a tape measure have to be used to determine the winner of a point. The leisurely pace of the game gives players a chance to catch up with one another’s upcoming travels and family and neighborhood news. As was pointed out more than once, the tradition of the game usually involves the serving of liquid refreshments.

On this Wednesday afternoon, Paul Cromwell was leading the Capitol Hill Village-sponsored games by helping get the teams sorted out, and relaying the rules to a new player. Cromwell says he has been playing for decades, having learned the game in Africa in 1965. Most of the players own their own boule set, which costs about $30 online, but extra sets are available for those who don’t. Everyone is welcome to come and play, and Cromwell says there are usually 4-12 players every week.

It is estimated that over 30,000 Americans play this game. There are 52 registered petanque clubs that play for national standing through the Federation of Petanque USA, including a club in Alexandria, the National Capitol Club. If you are looking for a game to play outdoors that is fun, social, and maybe gets your competitive juices flowing just a little, check out the games in Garfield.

Gary Albrecht, former chief of the US Capitol Police, finds the weekly hike a great way to get into nature while enjoying the companionship of friends. His wife Mary Ellen joins him on the hikes, which might be as close as the US National Arboretum or as far away as Senecca Falls in Maryland.

“There is not a lot of equipment needed,” says Albrecht. “You need a pair of good hiking boots or sturdy tennis shoes, dress for the weather, a water bottle, and backpack. Using a pair of hiking poles can also be handy.” The new REI store at 201 M St. NE is well-stocked with choices of poles and packs and anything else you might need to get out there. The store also has a great reference area to get topographical maps for local trails, if you are inclined to map out your own day of hiking.

The Easy Hiker group brings together many Capitol Hill retirees, both new and seasoned hikers. Each Wednesday, there are two different outings planned, and no advanced reservations are needed. As Albrecht says, “You just show up to the designated parking lot at the designated time, and join the group.” All the information is available on the PATC website, www.patc.org, in the calendar section.

Albrecht has been hiking on Wednesdays for 17 years and says the group averages about five miles a hike, which takes about three hours. They often pack a lunch and eat it on the trail or together after the hike is over. Over the years, he has observed a rare lady slipper’s orchid and amazing hawks and eagles. A former Boy Scout, Albrecht says being out in nature has always been a part of his life. The Easy Hiker trails are planned to avoid uneven terrain and limit hard pavement, which makes the walk a little easier on the joints.

In addition to the Easy Hikers Wednesday outings, PATC has many hikes and opportunities to volunteer for trail maintenance projects and become part of the Appalachian Trail network.

Play Ball!
The DC Department of Recreation sponsors senior softball leagues that begin in May and end with the DC Senior’s Citywide Tournament on July 14-28. Currently, in the Senior Citizen Slow Pitch League, the Ward 5 Showtime team is ahead in the standings with five wins and no losses. Some teams have had rainouts and are moving to catch up on their games. Some teams are coed, with women playing a variety of positions, and women often are designated runners for players no longer able to make it around the bases. But don’t let that fool you, the Ward 8 Sluggers and Ward 6 Bombers, playing on a June morning at the Ridge Road field, were hitting the ball out of the park.

Games usually are played at Deanwood Recreation Center or Ridge Road. Players go by their first name. As Mike from the Sluggers told me, “We enjoy playing the game, but even more we enjoy the chance to catch up with old friends. There are some of us on the team who have known each other since middle school.”

The joy, laughter, and sportsmanship that teams display make you remember what sports should be all about. It’s a great way to get two hours of exercise into your week. Local residents bring lawn chairs and lunch to cheer their neighbors on. The schedule can be accessed by going to the Department of Recreation website – https://dpr.dc.gov/service/adult-softball.

Summer is just about the best time to get out and find your game. Try something new or connect with an old love. Who knows? Maybe you will be in an age group where finally you can be the number-one player.

Rindy O’Brien is a longtime Hill resident who enjoys tennis and yoga and is back to training for the Ever Walk challenge in the fall. Contact her at rindyobrien@gmail.com. 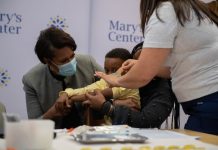