Medical marijuana is about to celebrate its fourth year in the District. However, lack of patient enrollment has the medical cannabis industry wondering if residents know cannabis can treat a variety of mental and physical conditions including chronic pain, insomnia, and anxiety-related disorders such as post-traumatic stress disorder (PTSD).

The city supports the program, recently adding an opportunity for a dispensary license. Once awarded, it will bring the medical pot shop count up to six. Yet, less than one percent of the city’s population currently participates in the medical marijuana program. That’s around 5,000 card-carrying patients in DC compared to 107,798 in Colorado, 138,056 in Washington, and 758,607 in California (www.medicalmarijuana.procon.org).

The disappointing number has the DC cannabis industry wondering if residents understand that the therapeutic benefits of cannabis stretch far beyond cancer treatment and management of chemotherapy’s terrible side effects. “It’s interesting given the number of DC residents that voted in favor of medical cannabis,” says Vanessa West, general manager of Metropolitan Wellness Center (MWC), a holistic dispensary located on Capitol Hill. “There was a huge voter turnout during these times, and around 69 percent of voters came out in favor of medical cannabis. The fact that the patient numbers are so low, it doesn’t match up.”

Why the Low Demand?
West says there is a variety of reasons why the turnout is so low, one being lack of knowledge about the medical marijuana program, what it entails to get a card, and minimal physician participation.

Patients who disclose why they are coming into MWC say that many of their issues stem from chronic pain including back issues, spinal injections, and herniated discs. There are also those looking to treat anxiety and depression, which West says are some of the most common issues she sees.

“A lot of patients are treating for ADHD [Attention Deficit Hyperactivity Disorder] and have been on Ritalin or Adderall for very long period of time and haven’t enjoyed the side effects,” says West. “They are grateful to have a place to go where they have a variety of options to choose from. We also have folks that are treating for arthritis, as well as veterans and people who have been through traumatic situations who are treating for PTSD.”

Rose Feroah has been a patient with MWC for two years and credits the products and knowledge as the treatment she needed to relieve her PTSD symptoms. “Since I’ve gotten my medical marijuana license, I’ve downed my daily medicines from 14 pills to five, and three are allergy medicines,” says Feroah. “I got rid of all of my anti-depression and anti-anxiety pills, and have none of the horrible side effects with medical marijuana.”

West says that finding a physician to write a recommendation isn’t usually a problem because many dispensaries have established relationships with doctors and can provide referrals, but there is still a multitude of other issues. “The physicians can’t take insurance because they are recommending a federally illegal substance, and insurance will not cover the cost of the office visit,” says West. “Sometimes the physician doesn’t want to disclose that they are writing a recommendation for cannabis, or have no idea what their legal rights are and don’t want to touch it with a 10-foot pole.”

West says she and her team try to educate physicians in the area but don’t always have the resources to do the outreach that they’d like. “We try to do our part. We will sometimes jump on the phone with a list of doctors we have and make phone calls,” says West. “We’ve also done a couple of in-service presentations at city hospitals, but they’ve basically fallen flat. We don’t have the resources of an army of sales representatives to go around to doctors’ offices peddling cannabis, we just don’t.”

More Than Cancer
Many patients who are using cannabis cite less severe side effects than pharmaceutical prescription drugs as one of their favorite aspects of medical cannabis. “I react poorly to opioids, and they are addicting,” says Feroah. “They would cause me to have nausea, dependency, and co-dependency with other medicine. I like that I can regulate dosage, address exactly what I need in that moment or the next three hours, and I have more control than I ever did when I was taking anti-anxiety or antidepressants.”

The Americans for Safe Access Foundation (ASAF) – the largest member-based national organization of patients, medical professionals, scientists, and concerned citizens promoting safe and legal access to cannabis for therapeutic use and research – published a report on aging and marijuana. The collection of studies paints a picture of how cannabis can help with conditions typical of the aging process. Some of the mental and physical conditions of aging include arthritis, chronic pain, diabetes, Parkinson’s, and Alzheimer’s. Medical marijuana has been shown to reduce the agitation common to Alzheimer’s sufferers according to the American Society of Consultant Pharmacists.

Regarding the management of the symptoms of Parkinson’s, the therapeutic use of cannabis for treating muscle problems and movement disorders is well documented. In 1839, Dr. William B. O’Shaughnessy noted the plant’s muscle-relaxant and anti-convulsant properties. Then, in 1890, Dr. J. Russell Reynolds, physician to Queen Victoria, wrote that “[for] organic disease of a gross character in the nervous centers … India hemp (cannabis) is the most useful agent with which I am acquainted.”

Aspirin for Arthritis? Think Again
Popping an aspirin from time to time seems harmless enough, but for those suffering from arthritis it can do more harm than good. Aspirin is a nonsteroidal anti-inflammatory drug (NSAID) and must be taken in large, continuous doses of 1,000-5,400 milligrams a day to be effective. Such high quantities can cause stomach pain or internal damage.

Alternatively, cannabis can improve mobility and reduce morning stiffness and inflammation. Research reveals patients can reduce their use of potentially harmful NSAIDs when using cannabis as an adjunct therapy. It’s even been proven preventative in extreme cases, like rheumatoid arthritis sufferers. According to the September 2005 issue of the Journal of Neuroimmunology, Tokyo’s National Institute for Neuroscience finds that “cannabinoid therapy of rheumatoid arthritis could provide symptomatic relief of joint pain and swelling as well as suppressing joint destruction and disease progression.” Rheumatoid arthritis is one of the most widely recognized qualifying conditions in most of America’s medical marijuana states.

A Non-Addictive Solution to Chronic Pain
Studies are finding that medication typically prescribed by doctors, like opioids and other pharmaceutical drugs, are failing patients and their communities. The problem with clinically studying medical marijuana is the plant’s status as a Schedule 1 substance. The federal barrier prevents researchers from obtaining the medicine for trials. It may also cost research and development companies as well as universities their funding dollars from state or federal grants.

Despite the hurdles, there is a growing body of research investigating cannabis as an adjunct to or substitute for opiates in the treatment of chronic pain, among other conditions. A 2012 study concludes that the lack of federal oversight should not “dissuade medical opiate users from trying to add cannabis to their pain management regimen.” The study also describes the benefits of cannabis over opiates, concluding that “community-based medical cannabis dispensaries have proven successful at supplying patients with a safe source of cannabis within an environment conducive to healing, and may be reducing the problematic use of pharmaceutical opiates and other potentially harmful substances in their communities.”

Given that opiates have undesirable side effects and are addictive, cannabis is becoming a safe and healthier alternative for treatment. “The use of micro dosing (using the smallest dose of cannabis necessary to achieve the desired effect) can be extremely beneficial,” explains Takoma Wellness Center President Stephanie Kahn. “It can help in managing anxiety, depression, muscle spasticity, GI disorders such as Irritable Bowel Syndrome and Crohn’s Disease, PTSD, and nerve pain.”

Smokeless options and tapered dosages are now the norm at dispensaries. Talking over recommended doses with knowledgeable doctors and your budtender is crucial, as cannabis is not a one-size-fits-all medicine.

Medical Professionals
Cannabis as medicine is slowly gaining acceptance from medical professionals as it becomes more mainstream. The American Nurses Association (ANA) not only backs cannabis patients, but supports the rescheduling of marijuana for medical use. The ANA issued a resolution on the issue, announcing support for healthcare providers who recommend medicinal use. Its policy also supports “the right of patients to have safe access to therapeutic marijuana/cannabis.”

Cannabis in DC
It took more than a decade for the District to get a medical marijuana program. Voters passed a medical legalization bill in 1998, but it wasn’t until 2010 that the city passed new regulations, and the first dispensary didn’t open until the summer of 2013. Dispensaries are also facing regulation issues from the Department of Health (DOH), stated one DC medical cannabis advocate, who chose to remain anonymous out of fear of DOH retaliation.

“The DOH, I would say, is probably the biggest hurdle that we have in the program right now,” the activist states. “Aside from the fact that the card only lasts a year, there’s an application fee every year, and the time that you have to wait to get your card is insane, so a lot of people’s cards will expire before they even have a chance to renew.”

He also says the DOH is unresponsive to inquiries and passive in providing educational materials to doctors and the general public. “The DOH doesn’t answer the phone, they don’t return calls, they don’t respond to emails. They also send the cards out via certified mail, so if someone isn’t home to sign for it, it goes to the post office, and if the post office contacts the DOH, the DOH doesn’t contact the applicant to say, ‘Hey, we have your card, come pick it up.’ There are just a slew of issues,” the source states.

“One of the laws is that the DOH was supposed to provide education on medical cannabis to DC physicians,” explains the activist. “Their version of that was just posting a couple of articles on their website. They are a regulatory agency and aren’t here to make sure the program is a success, so they’ve left it in the hands of the dispensaries, which don’t have the resources.”

The approval of the medical marijuana industry in the area is sparking interest from highly regarded Maryland-based health institutions, with cannabis medical conferences at the National Institutes of Health and studies at Johns Hopkins University.

West wants to let patients know that MWC exists and welcomes residents to stop by with any questions or needs. “From edibles to flowers, we are providing a quality product and a great alternative to whatever coping mechanism you’ve been using. Many strains are available. If you’re sick and are on a bunch of prescriptions, cannabis products are great and healthy alternatives.” 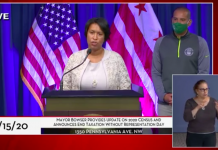 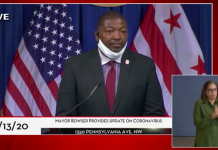 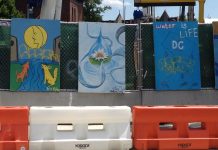