Recently, with all the talk about how our garden practices may be harming bees and pollinating insects, the discussion of beneficial insects has again become a hot topic. Products on the market address many areas of insect infestation:

As we become increasingly concerned about the effects of chemicals on us, it makes sense that the good bugs are back in the picture, hopefully for good.

The Beneficial Nematode
Beneficial nematodes seek out and kill over 200 species of insects in the soil and will have no harmful effect on species such as ladybugs, earthworms, and other beneficial creatures. The lifecycle of beneficial nematodes involves six distinct stages: an egg stage, four juvenile stages, and the adult stage. The adult spends its life inside the host insect. The third juvenile stage enters the bodies of insects. Some nematodes seek out their hosts, while others wait for the insect to come to them. Host-seeking nematodes travel through the soil in search of insect larvae. They can also follow trails of insect excrement. A single nematode finds and enters an insect through its skin or natural openings. The nematode releases a toxic bacterium that kills its host, usually within a day or two. In less than two weeks, nematodes pass through several generations of adults, which literally fill the insect cadaver. Bye bye, bad soil-dwelling insect.

Decollate Snail
This snail is a supercharged, rapacious predator that feeds readily upon common garden snails and slugs and their eggs. When placed in the hosta garden, it will make quick time of the common garden snails and slugs that make your beloved hosta resemble Swiss cheese. This snail does eat plant matter, but the damage it causes is considered minor when measuring the benefit of its predatory prowess on garden snails and other pest species of snails. Decollate snails are tolerant of dry and cold conditions, during which they burrow deep into the soil. They are most active during the night and during rainfall.

Green Lacewing
With a love for aphids and all soft-bodied insects, this insect also stalks thrips, spider mites, whiteflies, and the dreaded mealybug. Lacewings are quite elegant in appearance and adept at hunting in the garden. If you have ever had a mealybug infestation chew through the tender shoots and buds of your flowering ornamentals, this bug is for you.

Ladybug
This is not the cute little insect everyone thought it was. A ladybug can work fast destruction to an army of insects. It will devour mites, whiteflies, and other soft-bodied insects as it blows through your garden on rapidly beating wings. Matthew at Ginkgo Gardens on the Hill shared a passionate conversation with me of just how wonderful the ladybug is for the garden. He recommends the Three D’s when doing ladybugs: “Down low, damp, and at dusk” he says. Keep them in your yard by releasing at dusk with the foliage soaked, and down low on the plants that are infested. “I call them nature’s Pac Men,” says Matthew. “They go up the stems eating, chomp, chomp, chomp like a Pac Man as they move to the top.” What a perfect end to those spider mites and aphids.

Praying Mantis
The garbage can of the insect-eater insect world, the mantis lays unassuming Styrofoam-like egg sacs, benign and almost innocent. Watch out for the hatch! The babies are born to eat insects. They are very territorial and when they hatch they will scatter in all directions to get away from each other. You see, they will even eat each other. Females are much larger than the males, and after mating will even capture and eat their mate. Bugs? What bugs? These animals will live and breed in your garden and be sentinel pest controllers.

Special thanks to the staff at Gingko Gardens for educating me in the art of insects. Never too old to learn the tricks again! The insects here and many others can be purchased or ordered from Ginkgo Gardens on the Hill, Frager’s Garden Center on the Hill, and numerous sources on the internet. Words to the wise: buy your bugs local. I got my ladybugs from Ginkgo’s and as a part of this article have released all of them into my garden.

Derek Thomas “The Garden Guy,” principal of Thomas Landscapes, is an accomplished garden designer whose designs have appeared on HGTV’s Curb Appeal and the DIY Network. His garden segments can be seen on YouTube. He has contributed garden segments to Fox 5 in Washington, DC, and is a contributor to the Smithsonian’s garden programs. He can be reached at www.thomaslandscapes.com or 301-642-5182. You can find and friend us on Facebook at Facebook/Thomas Landscapes. Follow us on Twitter @ThomasGardenGuy for great garden tips. 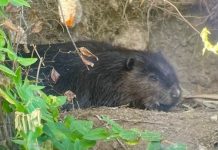 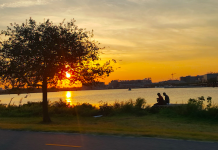