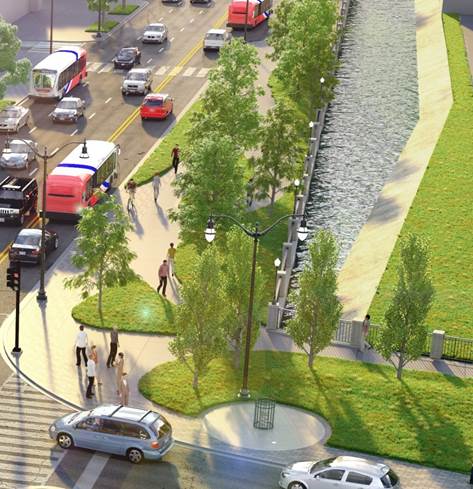 Southern Avenue, which divides the District and Maryland, is a hilly thoroughfare that residents have complained for years is plagued by speeders and unsafe intersections. The District Department of Transportation (DDOT) now plans to begin upgrading infrastructure and traffic patterns along nearly two miles of the avenue, from South Capitol Street SE to the United Medical Center. Wider sidewalks, new bus bays and stops, and bicycle lanes are among the upgrades planned, unveiled to the community at a June 15 public meeting.

Responding to complaints, DDOT officials said pedestrian and traffic safety is their top aim with the project, which began in 2012. Upgraded streetlights, pedestrian ramps that are compatible with the Americans with Disabilities Act, and more crosswalk markings are planned across the avenue.

The first part of the two-phase project will tackle South Capitol Street to Barnaby Road and is slated to begin next year, once final designs are approved this winter. Phase two for the rest of the avenue will start in 2019.

At the Southern Avenue and Indian Head Highway intersection, a gateway into DC, more trees and plants and a pedestrian plaza will replace what residents call an eyesore. A new bus bay on the east side of the street will ease backups.

At the community meeting, attended by about 50 residents, vocal criticism met plans to reduce traffic to one lane on some portions of Southern Avenue, currently a mostly two-lane road in both directions. The plan calls for creating dedicated turning lanes in select intersections as a way to prevent cars from backing up, while maintaining a second all-traffic lane. Beyond those intersections, traffic would return to two lanes. Ward 8 Councilmember Trayon White, who was not at the meeting, did not return requests for comment on the project.

Several residents said they believed that the lane modification would cause slowdowns on the avenue, often used by commuters. “We need two lanes on the entirety of Southern Avenue,” said Sandra Seegars, former council candidate and longtime community voice, to project managers, who defended the proposal but said they would consider feedback.

DDOT’s Abdullahi Mohamed responded that traffic analyses performed suggest the proposed configuration for intersections would reduce queuing and improve traffic safety. “We had a couple fatalities, and speed was one of the reasons,” Mohamed told residents. “When we say one lane, we don’t mean we’ll reduce the capacity of those intersections.” Seegars and others remained skeptical, however. DDOT did not respond to a request for followup comments.

“The one lane is not going to work, because there’s too much traffic,” said Olivia Henderson, the chair of Advisory Neighborhood Commission 8D, after the meeting. She and other ANC 8D commissioners at the meeting pressed DDOT officials to attend their ANC and present the project plans for further public review.

Inserting bicycle lanes also drew the ire of some residents, who thought it would slow down traffic and be unsafe for bicyclists. As currently designed, a northbound bicycle lane would be created on the avenue from the Bonini Road intersection to Southview Drive. On the west side of that stretch of road, street parking would be removed to make way for two southbound traffic lanes. For the rest of Southern Avenue, the project would create “shared lanes” for bicycles and vehicles.

At the meeting, residents also gave their own suggestions to the project team. ANC 8D Commissioner Absalom Jordan suggested the city create a “Barnes Dance” crosswalk at busy intersections, which allows for pedestrians to cross an intersection in any direction while traffic comes to a complete stop. (The city recently added one in Columbia Heights, following the popularity of one in Chinatown.)

At the least, Ward 8 resident Sterling Johnson said, she would like to see signalized crosswalks be timed longer for pedestrians, an issue at the South Capitol Street intersection and elsewhere. Others suggested blinking lights and neon road markings to alert drivers to pedestrian crossings. One of the top problems is cars not abiding signs, residents said.

Plans for the pedestrian plaza at the Indian Head Highway intersection drew favorable reviews from residents. Renderings envision shady trees and a renovated streetscape, along with a rehabilitated Winkle Doodle Branch bridge. Bioretention gardens would capture rainwater on that intersection and across the avenue. Henderson just hopes that the city will look after the often litter-ridden corner, where homeless congregate, after construction is completed.

What Would it Take to Reopen the District?