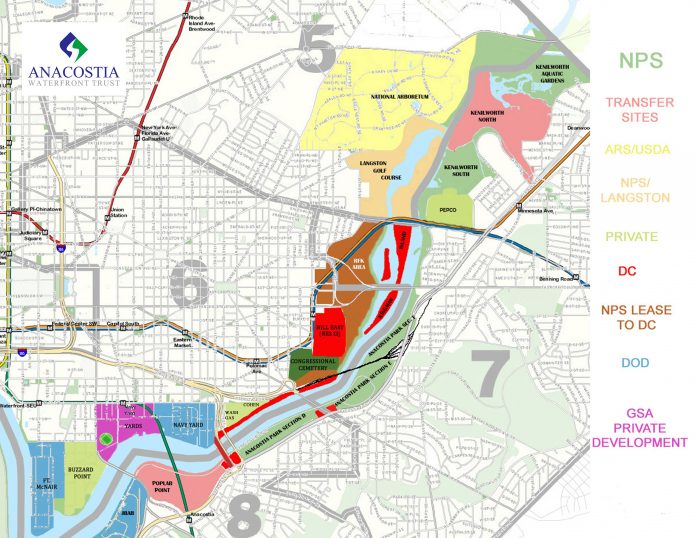 Former Mayor Anthony Williams, one of the most prominent visionaries for the river flowing through Washington, DC, began the Anacostia Waterfront Initiative (AWI) in 2000 to create a world-class waterfront through a cleaner river, new parks and recreational facilities, job-creating commercial centers, revitalized residential neighborhoods, and multimodal transportation options. Since the District of Columbia completed the AWI Framework Plan in 2003, in partnership with 19 regional and federal agencies, multiple entities have led many large and small planning efforts along the Anacostia and in surrounding neighborhoods.

This month I explain some of the major planning activities underway within the Anacostia River Corridor, defined as the river, surrounding public land, and neighborhoods and properties within easy walking or biking distance. This post is admittedly longer than any blog should be due to the number of players and plans. However, it’s critical for partners who want to improve the health of the Anacostia and the surrounding lands while providing opportunities for nearby residents to understand how planning elements and agencies fit together.

Key Players
The National Capital Planning Commission (NCPC) is the federal government’s central planning agency in Washington and the surrounding counties of Maryland and Virginia. It does not own land, but it develops and reviews plans affecting federal properties for the region.

The largest landholder within the corridor is the National Park Service (NPS), which manages Anacostia Park’s natural and cultural resources and provides a variety of visitor experiences. The park embraces approximately 1,200 acres along both banks of the river and includes Kenilworth Park and Aquatic Gardens, Buzzard Point Park, and James Creek Marina. The NPS also owns the land that houses RFK Stadium, the Armory, and the surrounding parking lots and leases it back to the District. The NPS has limited jurisdiction over the river bed in the District.

The District owns key parcels within the corridor, including Kingman Island and Boathouse Row; select NPS parcels (Poplar Point, Kenilworth North) will transfer to the District when certain conditions are met.

When it comes to planning, the key players are: NCPC; the NPS for land use and programming on its property; the DC Office of Planning (OP) for land-use planning of parcels that will transfer to the government of the District of Columbia; and the Office of the Deputy Mayor for Planning and Economic Development (DMPED) for development of those transferred parcels. OP, in collaboration with affected communities, also develops small-area and other neighborhood-level plans for neighborhoods and properties within the Anacostia River Corridor. DMPED implements development projects on District-government-owned properties that could provide greater economic opportunity and affordable housing.

The Department of Energy & Environment (DOEE) is also engaged in plans to clean up contaminated sites within and along the river, minimize environmental impacts of new development or redevelopment and climate change impacts on the waterfront, and identify and address opportunities to restore ecology.

Largescale Planning Efforts
The broadest plan is the Comprehensive Plan for the National Capital (Comprehensive Plan), which guides long-term planning guidance for the District of Columbia. It is divided into two components. The Federal Elements are developed by NCPC and provide guidance for federal properties in the District and region. The District Elements are developed by OP and are adopted as legislation by the DC Council. Both the federal and District elements are approved by NCPC and Congress.

The District’s Comprehensive Plan was amended in 2011, and OP launched the second amendment cycle in 2016 with a series of community meetings to hear feedback about neighborhoods and the District’s future. The second amendment cycle is addressing land use, environmental protection, economic development, parks, recreation, and open space, among other topics. It will also include the creation of a new Resilience Element that will address “the capacity of individuals, neighborhoods, institutions, businesses and systems to thrive in an inclusive manner … and plan for [and] recover from … adverse events.” OP is engaging the public throughout this process and anticipates submitting proposed amendments to the Comprehensive Plan to the DC Council by early 2018 to begin the local and federal approval process.

The NPS also plans at the large scale to support its vision for Anacostia Park as a model urban park that demonstrates how the Park Service can support historically underserved communities, provide economic drivers for revitalizing urban areas, and offer high-quality outdoor experiences, a healthy environment, and enhanced quality of life. The NPS specifically envisions a park that offers:

In February 2017 the NPS was scheduled to release a draft Management Plan/Environmental Assessment for all of Anacostia Park for a 45-day comment period. The management plan will serve as the primary park guidance document for the next 15-20 years and will be supported by subsequent, smaller planning efforts.

The document will be available for review and comment on the NPS’s Planning, Environment, and Public Comment website. I intend to discuss the plan in future blog posts when it is publicly available and to work with NPS and local organizations to engage community members in understanding, sharing feedback, and implementing elements of the plan.

Neighborhood and Parcel-Level Plans
Both the NPS and OP have finer-scale, neighborhood and parcel-level efforts underway for Buzzard Point, located near the confluence of the Anacostia and Potomac rivers in Southwest DC. The NPS’s Buzzard Point Park is a 3.4-acre waterfront park at the southern tip of the neighborhood. Though small, its 1,500 feet of shoreline create an important link in continuing the Anacostia Riverwalk Trail and improving access to the river. The NPS released the Buzzard Point Development Concept Site Plan on December 13, 2016, and collected public comments through January 27, 2017.

Following review of the public comments, the NPS will develop the plan to include a summary of the process, details about the concepts, and a set of recommendations. NPS expects to release the plan in April 2017. It will then seek funding to start an environmental assessment that will refine alternatives and evaluate impacts to park resources. This will be a public process. NCPC would review any projects to be built on NPS land as a result of the plan and assessment.

In parallel, OP is completing the Buzzard Point Vision Framework and Implementation Plan, which covers several blocks in Southwest DC adjacent to the NPS land on the Anacostia and Fort McNair. The framework is intended to “guide public and private development decisions” on the transition of an industrial area to a “mixed-use, highly walkable and environmentally sustainable neighborhood oriented toward an enhanced waterfront” and featuring a new DC United soccer stadium.

When Congress authorized the transfer of Poplar Point from the NPS to the District in 2006, it required the District to adopt and the Secretary of the Interior to certify a land-use plan. OP and DMPED are initiating a small-area plan for 110-acre Poplar Point. The 2006 legislation also requires 70 acres to remain natural. The District envisions the remaining approximately 40 acres as supporting a range of uses as well as accommodating changes to South Capitol Street, the new Frederick Douglass Bridge, and the I-295 interchange. The small-area plan will frame the vision for this critical waterfront site, and the final version will be submitted to the DC Council for approval.

These are not all the plans or developments recently completed, underway, or expected along the Anacostia Corridor. DMPED is leading the effort on Hill East District Redevelopment (formerly known as Reservation 13), and Events DC has developed short-term planning scenarios for RFK Stadium, both located at Capitol Hill’s eastern edge along the Anacostia. NCPC also proposed potential reuse strategies and enhancements to the RFK Stadium site in a 2006 study. The US Department of Agriculture will be updating its master plan for the National Arboretum. Even a self-professed long blog has its limits and can’t dive into all projects along the corridor.

A Waterfront Framework
Although planning efforts described above have flowed from the AWI Framework Plan and some elements have been implemented, there has been no update to the Framework Plan since it was completed in 2003. As OP notes in the Comprehensive Plan amendment cycle process, the city is in a different place now; decades of population decline have reversed, and population has grown by 100,000 in the last 10 years. Property values are skyrocketing, and concerns about equitable development and gentrification loom large. District and federal agencies, private interests, NGOs, community groups, and residents must wrestle with the hard question of who will benefit from this cleaner river and redevelopment.

The District has heard the need for more comprehensive coordination and implementation of Anacostia Waterfront plans and initiatives, and has ramped up efforts. OP has appointed a waterfront lead who is convening an Anacostia Waterfront Interagency Working Group. DOEE has hired an Anacostia coordinator focused on the river’s cleanup. The District will also be completing a progress report on AWI implementation that will highlight opportunities. These steps are important if we want to realize the vision of improved river health, public land access, and vibrant, inclusive communities. Efforts must continue to give residents a voice in shaping the future of these resources.

About the Author: Katherine Antos is the Ambassador for the Anacostia River under the Urban Waters Federal Partnership. The partnership comprises 14 federal agencies and numerous state and local agencies and community-based organizations working to restore impaired urban waterways around the country and reconnect and revitalize surrounding underserved communities. Each of the 19 Urban Waters locations has an “ambassador” helping to facilitate collaboration among partners to further the goals of Urban Waters. The Anacostia Ambassador’s position is funded by the US Environmental Protection Agency, National Park Service, and Department of Energy & Environment and a grant to the Anacostia Waterfront Trust. Katherine Antos can be reached at kantos@anacostiatrust.org.